What stages in your life have had the greatest impact on you and why?
The greatest impact has come from those moments when I had the courage to truly follow my heart and gut feeling, leading to decisions that are “insane” in the eyes of the vast majority of society.

For instance, rejecting a position on the board of a newly developed investment company at the age of 20. Instead, I decided to pack my bags and leave Europe to pursue my educational aspirations in New York—notwithstanding that, from a financial point of view, I had no idea whatsoever how to implement this crazy decision. Or for example, deciding to pursue the Executive MBA at the age of 34 as a single mother of a nine-year old son, and at the same time starting a C level position in a newly formed organization.

The times when I truly followed my heart and gut feeling have taught me that everything is possible, as long as you build on your strengths and are willing to take the initiative! Most of the time people just give up on their true desires too easily, putting the blame on their circumstances or the people around them, while in fact only they themselves are responsible.

Did you originally want to pursue a career in a different field? If so, why is it that nothing has come of your plans?
Show me a person who has pursued his/her original career idea, and I’ll show you a person who:

(a) has blindly followed a dream without really understanding his/her personal strengths, or
(b) has lacked the courage to make a change in his/her life, or
(c) is the rare exception that proves the rule.

So, in short the answer is: yes, of course, I wanted to pursue a different career, and not only once.
Last week, while cleaning my closet, a short essay written in the first grade appeared. The essay looked for an answer to the question “What I want to be when I grow up”, and my reply was without any doubt a medical doctor—a family doctor, to be more precise. So, the next few years passed by with my parents and grandparents being my first—and only— patients. ;-)

My firm decisions to practice medicine and IT have remained just dreams. Instead, I’ve become a leader, strategist and business developer. Will I continue working in that field for the rest of my career? Well, the honest answer is, who knows? All I know for sure is that, at a young age, you have no idea about your true strengths and what career suits you best. Nor do you like to listen to others telling you what you should do. You lack the experience to make the right decisions and to build on your strengths. Hence, many of us have dreams that will always remain dreams—life points out your real strengths and broadens your views on different professions. On top of that, every decade sees the emergence of new professions and even industries, making it even harder for you to pursue, at 50, the career you dreamed of when you were 20.

How and why did you come to work for Finance Estonia?
Helping the financial industry in its development and potentially leaving a meaningful mark behind is such a varied and interesting task that it was impossible for me to say “no” when I was offered this job.

What has changed in your career as a result of your MBA degree? How did the program support you in reaching your career goals? What concrete career opportunities have opened up for you?
The MBA itself has not changed my career. The MBA has changed me—it has resulted in a notable personal development, and the latter has had an impact on my career. With wider perspectives, expanded knowledge and a global network, my career has taken on new heights. Every day in the office gives me greater satisfaction, and I’m able to analyze situations faster, make decisions more swiftly and reach out to people in different countries for assistance in a matter of minutes. On top of that, the MBA has helped to confirm my strengths and taught me how to further build on them.

As for specific new career opportunities, the MBA has led to a notable inflow of headhunter approaches—roughly 2-3 a month. So far, I have decided to stick to my current position, as I see there is still a lot I can give to this company.

What was your biggest professional/personal success?
So far, my biggest success has been being able to make it to where I am right now both personally and professionally. But to be really frank, I think this is a question you will not be able to answer until you are 60+. After all, at the moment, I’m not yet even halfway through my professional career and personal life.

What are your goals for the coming year? Your goals in general? Is there still something you absolutely want to do?
For the ongoing year, my goal is to kick-start my own consultancy business by acquiring at least my first two clients. In general, my goal is to keep developing as a person and to teach my son the power of continuing personal development.

Is there still something I absolutely want to do? Yes, and not just one thing. ;-) Besides desiring to build a new-generation consultancy, I want to grab my best friends and travel by car to the most spectacular castles in Europe.

What do you consider a “great luxury“?
Making decisions based on your heart and gut feeling rather than external pressures and expectations.

What was the last book/movie you really enjoyed?
“Too Big to Fail” by Andrew Ross Sorkin, which is a superb synopsis of the months around the failure of Lehman Brothers - told from the perspective of multiple key players.

How would you characterize your philosophy of leadership? Has it been influenced by a leadership role-model?
I’d characterize my leadership philosophy as follows: true leadership means being a motivational example to the organization and having people follow you out of free will, not out of contractual obligation.

I don’t have one role model, but many local and global leaders have influenced my beliefs in diverse manners, like:
Tõnu Vanajuur with his ability to lead people through challenging times so seamlessly that they are not even aware of his protective hand,
Jack Welch, who firmly stood by what he believed in even when the entire world was against him,
Steve Jobs with his ability to build a brand of unbelievable value,
Christine Lagarde with her ability to show to the world that women can do it as well as men, if not better,
Angela Merkel and many more …

How do you recharge your batteries when you are not pursuing your demanding career?
The true answer is diversity. It always depends on whether I want to switch off completely or just take a quick break.

Being a hopeless movie addict—I have a collection of more than 300 DVDs—I find it very relaxing to watch romantic comedies, action comedies or drama. Sports, cooking and enjoying gourmet food in pleasant company are other great ways for me to switch off for a few hours.

When it comes to switching off completely, the following activities have proven most effective: a week of snowboarding, a trip of a few days to discover different wine regions, a weekend city break.

If you could change places with anyone for a day, who would it be?
Christine Lagarde.

Why would you recommend the Global Executive MBA of the WU Executive Academy? What did you like the most?
Prior to choosing this MBA, I thoroughly compared the EMBA programs offered in the EU. The WU Executive Academy’s program was the one with the highest number of residencies and the only one that covered three continents. It also offered the best value for money. Many universities overcharge for this experience just based on their brand premium, which I find insane. Now, after graduating, I can say that it was definitely the right choice for me, as it offered:
1.the right balance of residencies. Had there been more, quality would have suffered.
2.a great mix of professors. Being a dual program, the Executive MBA (Global) offered an opportunity for us to experience US, Austrian and even UK professors.
3.an extensive network of colleagues spanning 14 different countries.

Other projects, Mae is involved in...

Recently, Mae founded the discovery and comparison engine funderbeam for early-stage investment opportunities. In Europe and beyond. Currently, the online platform features about 6,500 start-up firms, about 2,500 institutional investors and over 6,000 private investors.

My motto in life:
Life is made for living. If you don’t live, you’ll have to die nonetheless. So make sure you live while you can.

I can laugh about:
… almost anything, but always about myself ;-)

Mistakes I am most likely willing to forgive:
… as a perfectionist, I’ll have to leave this sentence unfinished …

I would spend my last money on:
… a four-week journey through Europe with my family and my best friends so as to pile up a tremendous amount of good memories that keep me smiling all the time, even while living on a park bench.

In 20 years I will be:
… still be actively developing myself. 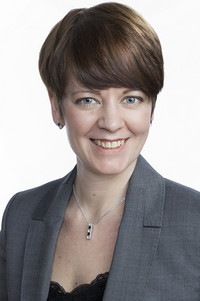 Mae Hansen works for Finance Estonia and is a Global Executive MBA alumna.