Moving to a Different Country – How Important is it to Speak the Local Language?

Mae, you lived and worked on three continents and in seven countries, all your family members have a different passport – a truly global family. What is the secret/how did you manage to live in so many different countries?

Honest answer is that fear is behind my global journey. Already as a child, I had this burning itch to see the world. As it later turned out, this desire was ignited by simple fear. Fear of being myself and fear of being rejected for who I am - a human being with fears, complexes, sins and virtues. So, I was constantly looking for that place and setting where I can be myself. Little did I realize that being myself had nothing to do with the surrounding but with knowing thyself and accepting thyself. In other words, I was running away from myself. Now that I have build up enough courage over the years to look into the mirror, the keen desire for endless adventures has disappeared. I’m now comfortable with who I am and where I am, no need to search myself in new surroundings. This, on the other hand, does not mean that self-discovery is over. It continues, just not through new countries nor cultures.

Of course, today, I have to thank this fear, as it helped me to see and experience the world in extraordinary ways. It truly opened my eyes and through this journey I discovered more and more of myself.

Mae, we know that you are already very integrated in the Vienna community and speak the language on a very professional level. Do you think it is necessary to speak German in Austria, although the country is considered as being very „international“? Which role do foreign languages play in general if people are planning to live and work in a new country?

Language played a major role in every new country. It was the only way to truly understand and experience the culture. I have to admit, I don’t understand people who choose to live long term in a foreign country without learning the language. It is simply disrespectful - living in someone else's home without showing even a slightest interest for them. In the long run, this attitude will weaken cultural diversities and living in one melting pot will not make us richer. Quite the opposite will be the case. I hope that someday legislators will see this and will substantially strengthen preservation of different cultures.

No matter in which country I ended up living, my first focus was to learn the language. Learning a new language can be a challenge, yet there is no better way to do it than living in that language environment. The first months were always the toughest, even when I learned English, which I had studied for 10 years prior to landing in the USA. Upon arrival, it felt like I had studied some completely different type of English at school. Took a while to get used to the local dialects, yet once I had succeeded to understand them, life became truly eye opening. Down to the point, where I could identify which State the conversation partner originated from.

How did you manage to pick up the language? Can you tell us a little bit more in detail how much time/dedication you needed to learn a new language?

German is my fourth language and the first one, which I have now picked up without language courses. I wanted to finally try this approach as well. It helped me to acquire the language, yet I still need additional professional help to become truly fluent. In daily conversations, I can manage quite well with a few mistakes. In a professional context, however, I want to have perfect, flawless language skills and for that, I will have to take additional language courses.

How did I get here? The first crucial decision was to use only German at home. No matter how difficult it was it had to be German. It was not easy for my husband, as in the beginning there were numerous situations every day where he had to repeat himself over and over again. In a few months, things had improved already significantly and I started watching TV shows and news in German. Although I have to admit that the first weeks of watching TV in German was really stressful. I couldn’t understand a thing, but at least I started to understand my husband. So there was hope at the end of the tunnel. After a few months of watching daily TV shows (“Two and a Half Men”) my skills had improved significantly. My smartphone has also been of great help.

All in all, with using language at home and watching TV shows regularly, it took about 6 months to get to the point, where I started telling my German speaking friends that they should speak German only. About 12 months later, I decided to acquire my coach certificate in German! That was a brave move, yet the very right one to push me out of the comfort zone and to take my language skills to next level. After 4 coaching modules in German, I felt comfortable enough to acquire my first German speaking client. In written documents deepl.com is still of great support to me. Nevertheless, I am now at a level, where I can understand everything, also Austrian dialects. However, I am still making mistakes, what is important is that I am noticing my mistakes more and more and that’s the first step towards professional fluency.

Do you think this is necessary in every country? Also, I know you have an interesting story to tell about Denmark and one word which explains the importance of knowing the language. Would you mind sharing this example with us?

Sure, learning a language is necessary in every country that one choses to live on a long-term basis.

Am happy to share the Danish example. My work took me to Denmark for some years and Danish was not considered a prerequisite for this assignment. In fact, I was part of a very international team, where the official work language was English. Nevertheless, we did have Danish people in the team and I had a strong exposure to the Danish culture. Can still recall my thoughts after the first week. I just couldn’t understand - why are Danish people so rude, do they really think that they are better than others? If they wanted something, they just took it, no politeness like “please can I have it”. Without learning the language, this impression would have been strongly imprinted in me.

Even though Danish was not a prerequisite, I wanted to learn the language and thank god I did. After a few private lessons, much of the Danish people’s attitude became clear. It turned out that the language lacks the word “please”. The word, in the sense that one is used to in many other languages, simply does not exist in the Danish language. No wonder that Danish people sound rude when speaking a foreign language. They simply don’t know how to use the word please, as they don’t use it in their mother tongue. Now that I have almost managed to learn German fluently, I can imagine what a clash of titans it can be putting Danish and Austrian together. One who is not used to even the word “please” and the other who doesn’t pass a single sentence without some expression of politeness.

That's how important a language is to better understand a culture and its people.

As you know, many of our community members would like to stay in Austria. What is your advice?

Make your decision to stay or not based on a cultural fit, not on whether or not you like the landscape or the food. A Cultural fit can only happen if you master to learn the language and it is one important key to happiness. Without a cultural fit you’ll be waisting your time and energy only to find out years down the road, that it’s not for you.

Other alumni also share their experiences of how knowing the local language was beneficial for their career. 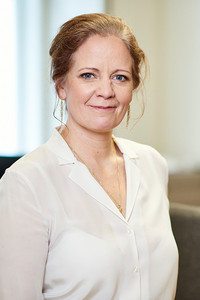 Mae Leyrer, a self-employed business coach, is a Global Executive MBA Alumna. She is President of the International Advisory Board of the WU Executive Academy and author of the book "Mastering Strategic Storylining".

Listen to our podcast with Mae Leyrer where she talks about turning changes into opportunities.