Roger Martin: One of the most influential thinkers of our time

Prosperity and participation for all - this is by no means an unrealistic vision: In the run-up to the Global Peter Drucker Forum, Roger Martin, one of the most influential management thinkers of our time, came to the WU Executive Academy to share his views and opinions on prosperity, the growing pay gap between “creative jobs” and “routine jobs”, and the future of work. The event, titled “Living the American Dream – Prosperity for Everybody”, also saw the European premiere of his documentary “ProsperUS”, in which Roger Martin presents his model of democratic capitalism as the basis of prosperity for all.

When the little boy asked his father, an entrepreneur, why he paid his workers far more than the going market rates, the father replied: “Because they simply need it, Roger.” These words have left a lasting impression on Roger Martin. And they have led him to become one of the leading management thinkers of our time. Recently, the Thinkers50 list, a renowned business ranking published every other year, named the native Canadian the world's most influential business thinker. Roger Martin, who for many years was the Dean of the University of Toronto's Rotman School of Management, heads the Martin Prosperity Institute and has a reputation for being an ardent advocate of the prosperity for all idea.

He is tireless in his efforts to bring about a change of heart in the international business community so that the growing gap between the rich and the poor, between low-skilled jobs and higher-skilled jobs can be closed. In order to make people more aware of his ideas, he has shot “ProsperUS”, a short documentary, which was shown for the first time in Europe at the WU Executive Academy on November 15, 2017.

The American dream remains a dream for many

According to Roger Martin's off-screen voice, the best thing about growing up in his small hometown was that “all were able to prosper, all had jobs”. Today, he says, there are many people who feel that the American dream is out of reach for them. A fast-food worker comments that people deny she is ambitious to achieve more in life simply because she has a low-paying job. A waitress speaks about the fact that she lives in constant fear of getting replaced, and a taxi driver talks about the cutthroat competition facing him. In the U.S.A., 35% of people work in retail and sales, making it the number one field of employment. “On average, they earn under USD 10 an hour. That is not enough to feed a family,” says Roger Martin. “And what is really paradoxical about this is that it does not have to be this way.”

In the course of the subsequent panel discussion with Barbara Stöttinger, Dean of the WU Executive Academy, the management expert decidedly declared: “We have to make businesses change their attitudes.”

According to Roger Martin, the wave of industrialization following World War II has led to considerable prosperity, which has been extremely beneficial, especially for big organizations such as General Motors. Work processes have been standardized, assembly-line efficiency has been maximized, making profit has become the top priority and the individual has been made replaceable. “People have been told to stop using their brains. This definitely has to change. It is high time that they started using their brains again,” Roger Martin urged the audience.

This was important, he said, because employees were the ones to bear the brunt of capitalist profit maximization, and as a result their spending power was on the decline. Moreover, he pointed out that the pay gap between routine jobs and creative jobs was widening not only in the U.S.A. but also in Europe.

So far, there have, in essence, been two business models, according to Roger Martin: A model based on a “let's make profit—no matter what” philosophy, and, in some places, a humanistic model that makes for happy employees but generates less money. The good news, he said, was that there is a third model—democratic capitalism: “Treat your people well, make sure that they use their brains in doing their work, and pay them adequately. And your business will make more money at the end of the day!”

Costco and Four Seasons: best practices in the lower and upper price segments

In the final analysis, Roger Martin's model of democratic capitalism means that all can make good money. Businesses, such as Costco, that have embraced the idea of democratic capitalism are a testament to its potential, according to Roger Martin: Costco does not make profit at the expense of its employees. On average, it pays them USD 1200 a month, or approximately USD 500 more than the industry average. At the same time, Costco turns over twice as much per square meter as its competitors. “However, democratic capitalism is not about being altruistic. Once you take a closer look, you will realize that at Costco simply everything is better: profitability is higher, customers are more satisfied, employees are happier, recruiting is easier—you name it,” said Roger Martin.

This approach works also in the luxury segment: Four Seasons, a globally successful hotel chain, pays its employees above average. Its philosophy is: “Treat your employees like guests.”

According to Roger Martin, this is achieved by encouraging employees to use their own initiative and accept responsibility. “As a result, employees earn more, and their performance is better—which in turn means that the team, the business and America as a whole will be more productive and more successful,” he explained, adding that an increase in employee earnings would, not least, translate into greater consumer spending power.

Roger Martin conceded that businesses might find it challenging to embrace democratic capitalism: “That is tricky because some change is needed on the part of businesses. But then again, it is not all that difficult: Treat your employees as you wish to be treated. Simply treat them as people who have feelings, fears and worries.”

When he was Dean of Rotman School of Management, Roger Martin started doing something that he believes all executives should do, and that is to delegate to others what they can do equally well or better and focus on those tasks that no one else can attend to. “I handed all financial matters over to my CFO: Her responsibilities increased significantly and so did her paycheck. She found her job much more rewarding, and I had, at last, 54 days a year to focus on things other than finances,” said Roger Martin.

Robots only for routine jobs

As far as the increase in robotization is concerned, the management expert explained that from today's perspective this development would lead to people being replaced by machines and artificial intelligence when it comes to doing routine jobs. “And this is why it is so important for people to become thinking, independent employees again. Those who use their brains are far less likely to be replaced by machines,” he said.

When a member of the audience asked him for his opinion regarding the introduction of a basic income for all, Roger Martin replied: “I do not think that we will need such a thing then. There will continue to be enough jobs for people in the future.”

In 2019, Roger Martin intends to issue, through his Prosperity Institute, a set of recommendations and an action plan for policy makers.

Effective personell management - including fair and attractive reward systems - are part of the curriculum in the Global Executive MBA. Click here to learn more about the MBA modules. 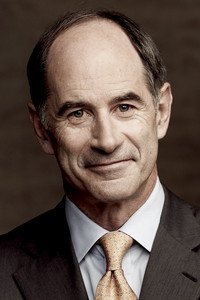 Roger Martin, who heads the Martin Prosperity Institute at the Rotman School of Management, University of Toronto, is an ardent advocate of integrative thinking in management. Moreover, the former dean of the Rotman School of Management is the recipient of the 2015 Social Enterprise Award and the author of ten books, including the best seller “The opposable Mind” (HBR Press, 2007), “Getting beyond Better” (HBR Press, 2015) and his most recent title “Creating Great Choices” (HBR Press 2017).