Sleeping with the enemy

Faster than the others, better than the others, cheaper than the others: While competition and rivalry are fundamental to business, it is becoming increasingly important for companies to join forces; the need for lean and efficient value chains requires them to embrace collaboration. In the following article, Helga Pattart-Drexler, Head of Executive Education at the WU Executive Academy, and Thomas Funke, Founder of TechQuartier Frankfurt, discuss how companies have successfully joined forces across competitive lines in the real world, why cross-industry approaches are the future when it comes to education and training, and what opportunities open up for businesses that collaborate in the field of HR.

Collaboration is the key to success - also for businesses. This is because digitization has blurred the lines between industries and increases the pace of innovation. It has also turned traditional business models upside down. Think, for instance, of companies such as Amazon or Apple that all of a sudden operate in fields far away from their home turf and, in doing so, disrupt entire industries. In many cases, collaboration and interaction can be more meaningful than stubborn rivalry, as is illustrated by the prominent example of the two pharma groups Sanofi and Boehringer-Ingelheim. They agreed to swap two of their business units, complete with the employees working there, which meant the animal health division was taken over by Boehringer-Ingelheim and the consumer healthcare business became part of Sanofi. This was a rather unusual but forward-looking deal.

Open innovation for the real world

An increasing number of businesses realize it is easier to get things done together. This is particularly striking where knowledge, education and training are concerned: “Under the banner of Open Innovation, this has already proven to be extremely useful in science,” says Thomas Funke, co-founder of TechQuartier Frankfurt and founder of several startups. “I see it at our startup center: When it comes to working with potential competitors, barriers have to be dismantled first.”

As Funke explains, it takes some time for people to realize that everyone benefits from this type of collaboration. The digital industry is ahead of other sectors in this respect, he says. There are several examples of how businesses combine different approaches with one another in smart ways: Payuca, a Viennese startup, for instance, uses the tools of the sharing economy to make unoccupied parking spaces in private garages available for short-term rental. Or Amazon, which today is active in many new fields ranging from music and video streaming to current accounts. Disruption, which plays a fundamentally important role in the digitalized economy, occurs more and more often outside one's own field - with far-reaching consequences for those businesses that are reluctant to respond to it.

Win-win for both startups and big companies

How does this collaboration work in real-life business? It is a matter of integrating an entire ecosystem. After all, tackling new developments alone is difficult and costly, especially for new firms. What they can do is join forces not only with other startups but also with established players in order to get access to their know-how and resources. These established firms will benefit from the cooperation because it allows them to tap into a kind of innovative potential that, given their size, many of them have lost or fail to make adequate use of.

Cross-industry formats as the future of education and training

In the context of learning, focusing on that which unites rather than that which divides is also beneficial in many respects. The theory of connectivism developed by Canadian scientist George Siemens states that learning works best when new connections are constantly being created via nodes - these can be people, books, graphics, etc. - and a network is thus created.

“What really matters is not the ‘what’ or the ‘how’ but the ‘where’, in other words where knowledge can be found when it is needed. This is a theory that, in the context of digitization and online platforms, has a really special significance,” stresses Helga Pattart Drexler, Head of Executive Education at the WU Executive Academy. She and her team are increasingly exploring the question of how companies can learn from one another in as efficient a manner as possible.

“We see in practice that developing targeted cross-industry formats has hugely positive effects,” continues Helga Pattart Drexler, adding that in the context of digital transformation it is doubly important for businesses to be aware of what other companies are doing and experiencing. Valuable knowledge and crucial experiences need to be shared through a constant process of give and take. “Frequently, businesses are unaware of the know-how that is available already,” says Helga Pattart Drexler. Stepping over dividing lines is particularly significant in the context of game-changing innovation - let's just think of the theory of evolution developed by geologist Charles Darwin.

It would be quite a radical step for businesses to take things further and put collaboration over rivalry in the field of HR too. 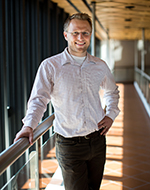 One possibility would be to bring together companies from different industries whose employees work on joint projects.

Cooperation between the staff of companies is one way of adapting to the changes in the HR market. Employees could work for a few months in this company and then for some time in another company. “A revolutionary idea that, at this point in time, seems inconceivable to many businesses,” continues Thomas Funke. But in actual practice employee swapping does already occur, albeit unintentionally and in an uncontrolled manner. The finance industry and to an increasing extent also the IT sector illustrate this quite clearly, with employees constantly fluctuating between different employers. “By joining forces in the context of projects, businesses could institutionalize this, and they would benefit from having access to a joint talent pool,” adds Helga Pattart-Drexler.

To stick with Charles Darwin: It is not the strongest that survive, nor the most intelligent, but the ones most responsive to change—and nowadays, more than ever before, this applies also to businesses.

Based on a company’s strategic goals, the WU Executive Academy will develop a customized training program for individuals, departments or all employees of the company. Click here to learn more about the custom leadership training programs.

Dr. Thomas Funke has been active in the global startup ecosystem for more than a decade. He is particularly motivated by seeing how starting a business can unleash new forces in young people, leading to increased self-efficacy. The former TechQuartier CEO is a long-time lecturer at the WU Executive Academy and co-founder of Tomorrow's Education.