Nipun Mehta, advisor to former U.S. President Barack Obama, recently offered fascinating insights into the power of “giftivism” in a speech at the WU Executive Academy. One of the thinkers behind the concept of a “gift economy,” he used his extraordinary keynote address to explain why a culture of giving not only transforms society but also makes a company more successful.

Nipun Mehta could have had a successful career at Sun Microsystems in Silicon Valley. But the affable Indian-born American decided to quit his high-paying job in his early twenties and devote his life to giving. Together with some friends, he founded ServiceSpace, an NGO platform dedicated to volunteering that connects more than 500,000 volunteers worldwide. He also coined the term “giftivism,” a portmanteau of “giving” and “activism.” For 20 years now, he has been studying the concept of a “gift economy,” traveling the world to propagate giving as the guiding principle of a new economy and everyday life.

Why Giving Makes You More Successful – Also as an Entrepreneur

Nipun Mehta’s ideas were even noticed by former U.S. President Barack Obama, who recruited him for his advisory council on poverty. “Give, and you will receive” – not only the Bible says so. Mehta’s concept draws on research carried out at Harvard University stating that the widespread belief that people are usually driven by greed or envy is in fact completely wrong. By giving to others, people activate their brains’ reward systems, meaning that they actually reward themselves in a sustainable manner, as the following example illustrates: people who receive 50 euros and give the money to someone else will activate their brains’ reward systems for a much longer period than those who spend the money on themselves.

An economy of giving not only has the potential to have a significant impact on our lives and society but also to make companies more successful. This thesis is also backed up by research. The famous psychologist and author Adam Grant identified three types of personalities: givers, takers, and matchers, who switch between the two poles. According to Nipun Mehta, consistent givers prioritize the well-being of the collective, the team, and the organization, and, as such, serve as role models that inspire matchers to give as well. “They are enthusiastic, have more willpower, encourage others, and make teams more productive,” he says. Givers who become leaders can have a lot of positive impact: “They enrich the system of values,” meaning that the team will be more driven by the common good or a company’s “ethical” goals.

“Organizations have to start rethinking their values,” he says. “They have to learn to understand that financial capital is not the only incentive and motivator. President Obama once fittingly said that capital may appear in different forms: it may be social, informational, experiential, spiritual, emotional, natural, and cultural.” Mehta states that it is crucial to pay more attention to employees’ individual potential in this context. “We all have our talents,” he says, pointing to SAP as a business case. The company deliberately hires people on the autism spectrum for their exceptional abilities, earning SAP a lot of media coverage.

From Leadership to Laddership

Nipun Mehta also has a tip for executives all around the world: “Ever tried laddership? We have to get rid of leadership and embrace laddership,” he says with a wink. But in fact, he is completely serious about it. Laddership serves as a sort of accelerator for executives and change-makers. Nipun Mehta explains that classic leadership is centralized, with a focus on plans and how to implement them, efficiency, and numbers. Laddership, on the other hand, is built in a completely different way: it focuses on the relationships between people to create an ecosystem in which everyone is connected to everyone else and all people are intrinsically motivated to create something from the bottom up (ergo the ladder). “Of course, this requires a completely different approach to leadership. Executives practicing laddership do not tell you how to do things, in which direction to go, and what the time frame is. They initiate activities and projects by giving little ‘nudges’ and actively nurture initiatives at their own discretion,” says Nipun Mehta. 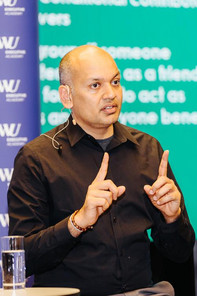 Of course, it is just as important to practice traditional leadership. One doesn’t exclude the other. Practicing leadership and laddership in a balanced manner has a great potential for change for everyone and also adds real value.

Giving as a guiding principle helps create real change-makers, says Nipun Mehta. He adds that social change has only ever been made possible by people such as Gandhi or Mother Teresa, who moved thousands of people. His remark clearly resonates with the audience. Concluding his speech, Nipun Mehta reminds the listeners of one of his most famous maxims, which has guided him for more than two decades: “When what we do is in service to who we are becoming, we shake the world.”

There are many interesting events at the WU Executive Academy. For more information about upcoming events, please click here.

Pictures of the Event: 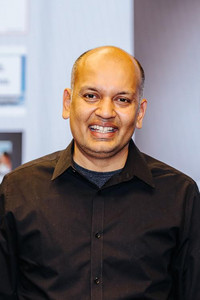 Nipun Mehta, advisor to former US President Barack Obama, is the founder of the NGO platform Service Space. As the founder of "Giftivism", he has been travelling the world for 20 years, spreading the economy of giving.