Book Spotlight: We all get manipulated, but we do not realize it

Prof. Johannes Steyrer about his new book "The Power of Manipulation"

“Manipulation happens always and everywhere. It is done consciously and unconsciously, by men and by women, by the rich and by the poor, by those who are in power and by those who are not. But hardly anyone is aware of it,” says Johannes Steyrer, author, Academic Director of the Professional MBA Health Care Management and professor at WU Vienna's Inter­di­sci­pli­nary Insti­tute for Manage­ment and Orga­ni­za­tional Beha­vior, in an interview about his new book entitled “Die Macht der Manipulation” (The Power of Manipulation).

Three things are typical of manipulation:

In our roles as partners, parents, teachers, supervisors, salespersons, etc., we all seek, all the time, to influence others with a view to making them think, feel and act differently. It happens more often than we think, and the dividing lines between leading, enticing, motivating and manipulating people are blurred.

Most of the WU Executive Academy's MBA graduates are managers or executives. Can you give us an example of what manipulation verging on enticement might look like in the context of their work?

Imagine you want an employee to spend two years working at a branch office that is to be set up in a remote company location that requires the person to relocate to a country that is not appealing. If you ask him or her directly whether he or she would be prepared to relocate, chances are you will run into resistance. So, what is a more auspicious strategy? Well, you could entice the employee into accepting by approaching him or her like this: “Speaking of that country, I had you in mind. We have very ambitious plans for the future there. Think, without obligation, about whether you can, in your opinion, play a bigger role in this context.”

At this point, your employee does not know that he or she is to relocate to another country. Yet the more the employee comes up with arguments in favor of committing himself or herself to working abroad (with a bigger paycheck, career advancement and other things in mind), the more he or she becomes set on his or her decisions. The employee accepts without knowing exactly what he or she is in for.

Only a little later does the employee learn that the first project will take him or her abroad. "I might as well see it through," he/she thinks. This is the first project, so the employee cannot possibly throw in the towel at this stage. Once in the other country, the employee sees the many challenges facing him or her. The greater the employee's investment in terms of time and energy, the more he or she gets caught up in the situation, falling victim to what is known as confirmation bias, in other words, the tendency to make new decisions in ways that confirm old ones.

How come the employee does not see through the enticement, and why is this approach effective?

Good manipulation does not try to talk people into or convince them of something. If it did, the result would mostly be resistance. The key to success is to make people talk themselves into doing what you want them to do. Conventional wisdom has it that people do the things they like. Obviously, that is true, but so is the opposite: People like the things they do. Thus, a fundamental rule of manipulation is to influence actions rather than attitudes. When we do something, we justify it to ourselves. We make ourselves believe what others want us to believe. This is called, e.g., the foot-in-the-door technique. For instance, the cancer-aid donation rate triples when people wear pins prior to donating. And this strategy also works in the context of making a play for someone: Only 3% of women accepted a man's direct invitation to go and have a drink with him. However, if he asked for directions before extending the invitation, the success rate was 16%.

Is that not immoral?

Yes and no. But let's face it. Executives are required to meet targets and motivate people. Who says that the employee will not find Mr. or Mrs. Right abroad and be happy with him or her there? And then there is the question of whether the script of life is written by us or by life itself. Life is much more of a carousel ride than we tend to think—we like to believe that we are in control with the steering wheel, the reins or the joystick firmly in our hands, when in reality we follow a preordained path.

Prof. Johannes Steyrer is the Academic Director of the Professional MBA Health Care Management. If you want to learn more about what is taught in this program, click here. 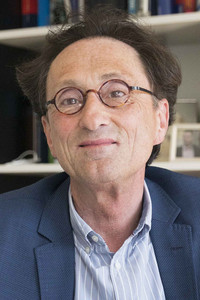