I’m a journalist by profession and my first education at Moscow State University, Faculty of Journalism, had a huge impact on my life. It was in the early 1990s, when the world was changing completely. The Cold War was over, the iron curtain fell, freedom and hope were in the air. It was not an easy time, sometimes our lecture halls lacked heating in winter, but at the same time we saw how the whole world opened in front of us and we accepted the challenge. For young journalists, like me, that time was unique in particular, as we experienced freedom of the press - a true luxury nowadays. The archives were opened, many people were able to talk publicly, a new language of Russian journalism was born. We had a chance to learn everything and we used this opportunity as much as we could.

I did not want to work for any Soviet style newspaper, like "Pravda" or "Izvestia", I was searching for something absolutely different. After my graduation I joined the ELLE Russia team. This international fashion magazine was launched on the Russian market in 1996 and it was something absolutely new, both for the audience and for those, who created the content. It was an excellent professional school for me. Imagine a small office with big windows in a famous constructivist “House on the Waterfront”, overlooking Kremlin and Moscow river, with river trams and barges passing by, where people of different nationalities - Russians, Americans, French, Canadians, Italians, Polish - created something that didn’t exist before. Very exciting times!

In the mid 2000s I was invited to become the editor of Boat International, Russia - the first international magazine about yachts in my country. By that time I had ten years of experience in writing, editing and content production. Yet my new position required becoming the top manager of the project and my role was focused on strategic planning and key account management. It worked out very well: the magazine paid off in three years, which was a record, even for bigger magazines at that time. Moreover, the new lifestyle format that we introduced to the yachting press was soon adopted by our mother publication in the UK.

After the world financial crisis of 2008, the world of media started to change dramatically. Advertisers became more cautious regarding their expenditures, digital technologies disrupted traditional business models of the printed press. The process of communications went through a serious transformation, sometimes bypassing media and going through B2B channels. Content has changed dramatically and brief forms took over long reads. Media managers had to face the new reality. By that time I was the General Director of another big yachting publication - Yachting, Russia’s Premier Marine Magazine. My goal was to go into the digital sphere and try new formats. That was also very challenging!

I always had a passion for communication, no matter which form it takes. In my early professional years, traditional press was evolving in a most amazing way. Nevertheless, communication and media nowadays have more opportunities than ever because of the internet, social media and immersive technologies, like virtual, augmented or mixed reality. Isn’t that exciting, that real world is mixing with imaginary world? It is something we were dreaming about while being kids and watching movies, like “Back to the Future”, directed by Robert Zemeckis. This mixture of the real and the imaginary started in the mid 20th century with postmodernism and we saw many examples of that in advertisement, branding and consumption. Where are we going now? Does that mean that all communication will move to virtual worlds, like in Steven Spielberg’s recent movie “Ready Player One”, where all the main characters live in the so-called OASIS? I’m not quite sure, but lots of things are already happening virtually, except probably fine dining. We buy online, we interact online, we explore things online. I’m sure that more and more platforms will emerge, but I hope they will not replace the real world, but will complement it.

After my graduation from the WU Executive Academy I was thinking what I'd like to do and I discovered virtual and augmented reality technology. It looked so exciting, that I decided to combine my passion for yachts, design, architecture, communication and technology in one project and called it ANCHOR-VR. Anchor has a reference in the maritime scene and also in the world of communication, where anchor is a synonym for a broadcaster. My company provides virtual and augmented reality solutions for the superyacht industry. I believe that this project is a natural continuation of my career in communication and yachting. Obviously, VR/AR has become a new communicative medium. It helps to communicate faster and more efficiently. It’s a very powerful platform for story telling, for exchanging ideas and creation, for early design validation and for remote communication during project development.

How and why did you come to work for ANCHOR-VR?

I already answered this question partly, but let me put it in a slightly different way: What’s my biggest motivation for this project? There are many. Now I’m reading a new book, written by Jaron Lanier, one of Virtual Reality technology pioneers, who invented many great definitions of VR. Here is one of them: “[VR is] a twenty-first-century art form that will weave together the three great twentieth-century art forms: cinema, jazz, and programming”. For some people it is not easy to believe in VR, they reject to wear Head Mounted Displays (HMDs). It is true, that some HMDs are really good, while others are still not ready for the mass market. But if we recall the first days of cinema in the late 19th century, people ran away from the train approaching the railway station in an early Lumiere Brothers’ movie. This is one of the reasons why I’m interested to work with VR technology. I see a lot of potential, fun and inspiration in it. It’s about how to touch the future.

As Thomas Zimmerman, another pioneer of virtual reality once stated, “seeing means believing.” It is so true. And VR is already very useful for people and companies. For instance, it allows to save time and money on project development. VR replaces physical mock-ups, which are very old fashioned and expensive to produce and to utilize. VR is great for training, as it could simulate any emergency situation in any complex environment. And you don’t need to physically build this environment, you may create it virtually. VR is a significant part of Fourth Industrial Revolution and Industry 4.0, it helps to create a digital twin of every product at a very early stage of product development and it allows to work with this digital twin during all the stages of project development, experimenting with its shapes and qualities.

Many things have changed in my career after my MBA. Most importantly, the program gave me courage and energy to step to a new level. It was great to summarize all my professional experience in communications and management and to structure it. Networking with other students from different countries and professional backgrounds and working together on various cases, also helped me to look at myself from the outside and to identify my strengths. The program is absolutely brilliant because it allows you to see who you are in a broad perspective and helps you to create your long term career development plan. It helps you to prioritize things in life, having a broader picture in front of you.

Perhaps, not to be attached to my past achievements.

We have done a lot in 2018 and we have even more ambitious plans for 2019. Next year we will do our best to deliver most up-to-date VR solutions to our clients and introduce more comfortable ways of using VR in every day life and work. We plan to integrate VR into the daily routines of our clients — and their clients — and to make life easier and more exciting for them. We will keep working on customer development and branding, spreading more information about the advantages of VR/AR technology and its ability to present projects.

Speaking about long-term goals: building a sustainable business, that might be able to transform the very conservative industry of designing and building yachts, and, most importantly, to let yacht owners co-design their future boats using the advantages of VR and become true participants in project development, not just passive viewers.

What was the last book you really enjoyed?

Speaking about fiction, it is “Baudolino” by Umberto Eco. Speaking about business literature, it is “Antifragile: Things That Gain from Disorder” by Nassim Nicholas Taleb.

My philosophy of leadership is based on personal responsibility. I believe that it’s very important to put your skin in the game.

I love the sea and sometimes I need to be by it to reestablish my connection with nature. The sea is the source of energy and inspiration for me.

Perhaps, with an astronaut. I’d like to see how Earth looks like from the space. It is always good to have a big picture.

Why would you recommend the Professional MBA Marketing & Sales of the WU Executive Academy? What did you like the most?

I absolutely loved the atmosphere of the school, it is very professional and friendly. It is important to note, that Vienna University of Economics and Business is the oldest business university in Europe, at the same time it has one of the most contemporary campuses. For instance, the WU library was designed by Zaha Hadid. The admissions process was challenging, but not too stressful and the scholarship system was a good bonus.

I appreciated the high qualification level of students from around the world being selected for the program - from the US to Singapore, Middle East, Brazil and China. The learning process was organized in a smooth way. Everything was planned beforehand, you knew all the deadlines in advance and could plan your time, both with studies and life. Besides, Vienna is a great city to study in with a great heritage, modern infrastructure, cosmopolitan character and lots of places to enjoy after studies, from the opera houses to museums, beautiful parks and good restaurants. The WU Ball in January is definitely a great way to keep in touch with your classmates after graduation. And learning how to waltz is another great advantage of your studies at WU.

I can laugh about:
False news and propaganda, both are becoming too strong worldwide.

Shortcomings I am most likely willing to overlook:
I believe that the devil is in the detail, and very often I spend too much time trying to make things perfect. But often things just need to be done in the most straightforward way. This is one of the lessons I learned during my MBA.

I would spend my last money on:
Traveling because it makes you see the beauty of the world and its diversity.

In 20 years I will:
Live in harmony with the world and keep discovering it. 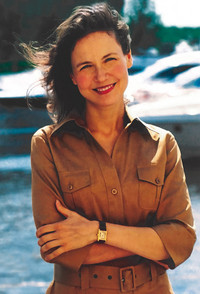