You recently won the “Lideri de Succes” (Successful Leaders) Award in Romania. Can you tell us more about the background of the award and the award ceremony?
The event was the 13th Romanian Insurance Market Awards Gala and took place on 28 March 2013. It is the most important event for the insurance companies present on the local market (with total sales of around EUR 1.9 billion for 2012) and is organized annually by XPRIMM, a media and advertising group specializing in the insurance and private pension industry. More than 400 professionals from the field were present at the gala. Besides the general awards—e.g. for company of the year, product of the year, etc.—there were also some special ones, and I won the “Lideri de Succes” (Successful Leaders) Award, which is unrelated to the company awards and granted for individual merits.

What does it mean for you to have received such a highly esteemed award?
At 31 with around two years of experience on the Romanian insurance market, I consider the award a recognition for my efforts in the company and in the field. Raising corporate standards and professionalism at an individual level is indirectly beneficial for the entire market. I am happy that we have managed to build a good team at Euroins Romania, that we continued to strive for stability in the years of general market decline. The Romanian company was among the few market players that achieved growth in the past periods, and, in 2012, managed to generate a profit for the first time. As the CFO of Euroins Insurance Group, I am very proud of this achievement.

What stages in your life have had the greatest impact on you and why?
With the risk of getting too philosophical, I would rather see life as a continuum than split it in stages. Every moment has its own impact on the development of a person. Even in situations of relative peace and quiet, you may suddenly get struck by a revolutionary thought or idea which may change the course of your day, your week, your year, or your life. There certainly are events and people that are more special and may have more than the usual impact on a person. For me, these people include my parents, my fiancée, some of my teachers throughout the years, some of the managers I have had until now, some of my colleagues and friends. My decision to leave Bulgaria and pursue a career abroad has also had significant influence and impact on me.

Did you originally want to pursue a career in a different field? If so, why is it that nothing has come of your plans?
I guess the younger a person, the braver his/her ideas. I was and still am an occasional dreamer. However, at some point rationality, mixed with the experience I had gained, took over—and here I am as a CFO in insurance.

How and why did you come to work for Euroins Insurance Group / Euroins Romania?
Euroins is an insurance company headquartered in Bulgaria, with subsidiaries in Romania, FYROM, Turkey and a minority shareholding in a company in Serbia. There was a vacancy for a CFO of Euroins FYROM (Macedonia), and I accepted the challenge and left the hectic, but still arranged environment of Ernst & Young. A couple of successful years later, I was promoted to Euroins Romania (the biggest entity of the group in terms of turnover and network) and to CFO of the Group.

What has changed in your career since you enrolled in the Executive MBA Bucharest? How does the program support you in reaching your career goals? What concrete career opportunities have opened up for you so far?
The program is still at an early stage. For me though, there definitely and always are new responsibilities, even within the old environment. The program is broadening my horizons, giving me a wider span of thoughts and practical skills. The program helps you become a better team player and fosters the soft skills needed for a better understanding and tolerance of different points of view and opinions. Some years ago I remember reading that MBA programs in general are outdated and can no longer meet the needs of the changing business world; however, the WU Executive MBA proves the opposite to me. It’s a great practical experience—once in a lifetime.

What are your goals for the coming year? Your goals in general? Is there still something you absolutely want to do?
I have a few goals for the coming year ahead – to graduate, to reaffirm the profitability of my company, which in the current times is like trying to defy gravity. In general my goal is to keep a high morale in my actions, to serve as an example and to never give up on a right cause.

What do you consider a “great luxury”?
Unfortunately, time for pure relaxation is a great luxury these days.

What was the last book/movie you really enjoyed?
“Silver linings playbook”

How would you characterize your philosophy of leadership? Has it been influenced by a leadership role-model?
Leadership through humility and constant striving for knowledge, always for a cause. An eclectic leadership style from many leaders.

How do you recharge your batteries when you are not pursuing your demanding career?
By spending time in nature with the people who are closest to me; by caring for the simple things in life, by skiing in the winter or simply by relaxing. And by travelling a lot.

If you could change places with anyone for a day, who would it be?
Kim Jong-un, in order to open the borders in North Korea.

Why would you recommend the Executive MBA Bucharest of the WU Executive Academy? What do you like the most?
Definitely. I think I answered above.

My motto in life:
Keep it real, keep your promises and make it happen!

I can laugh about:
Things that don’t seem funny at first sight.

Mistakes I am most likely willing to forgive:
Immaterial and minor shortcomings.

I would spend my last money on:
Depends on how much I have left.

In 20 years I will be:
Hopefully have no reasons to regret the previous 20 years. 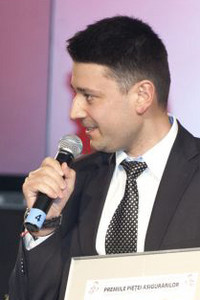