Actually, each and every part of my professional journey has shaped me in its very own way. While studying for my degree at WU Vienna, I completed a wide variety of vacation internships, and ever since that time, I have been eager to make career moves that provide me with opportunities to learn something new and broaden my experience. Without a doubt, it was during my first career stage at KPMG Consulting that I acquired the methodological tools of the trade—e.g. process analysis and project management skills—, which I supplemented by developing my expertise in HR management, corporate strategy as well as Business Development and Communication matters.

As a child, I always wanted to become an archeologist or a paleontologist. Much to the annoyance of my parents, I was a passionate collector of fossils and ancient objects such as potsherds. At age 18, I decided to study business administration at WU Vienna so as not to limit myself to one specific career path but keep my options open for the time being, not least with regard to other hobbies of mine like collecting modern art and traveling. I am still very much interested in history, and sometimes my wife and our three little children have to “suffer through” a visit to the museum with daddy.

How and why did you come to join Ascend Strategic Communications?

In 2015, I, at last, decided to no longer earn my living in a salaried position (back then, I worked for Webber Wentzel, one of the biggest African law firms, serving not only as Head of Business Development, Marketing and Communications but also as a member of the executive committee) and subsequently founded KOHMAP Consulting, a management consultancy specializing in professional services, which was eventually supplemented by Avuka Training and Coaching, a corresponding training provider also specializing in professional services. Shortly after founding KOHMAP, I got asked whether I would like to help set up the EU Chamber of Commerce and Industry in South Africa as a senior advisor. In the course of my career, I had gained considerable experience working at the intersection of business administration, economics and law, and the fact that I was a European who knew “the situation on the ground” and had local contacts meant I was really cut out for this job.

Following the start-up phase of the EU Chamber, the idea emerged of establishing Ascend Strategic Communications in collaboration with a valued colleague I had worked with at Webber Wentzel. Since 2017, Ascend has been advising private companies, government agencies and NGOs on strategic communications and policy development. Current examples of typical projects include South African policy monitoring for a global OEM in the automotive industry or managing a subproject (Contribution of EU FDI to Inclusive Growth in South Africa) in the context of the EU-SA Dialogue Facility.

Incidentally, the sister companies KOHMAP and Avuka exist to this day and have succeeded in winning numerous advisory mandates in the legal sector. We have most recently been accredited as the first training provider in Africa by the International Institute of Legal Project Management.

Completing the Executive MBA strengthened my resolve to accept leadership responsibility, and I proactively pursued this idea, which ultimately led me to give up a senior management position that didn’t really involve managing people and instead become the head of a department with a team of eventually 21 where I was required to bring about significant strategic and organizational change.

Studying for my MBA degree allowed me not only to refresh and update my understanding of many of the concepts I had originally learned about at university but also to gain fresh insights in the course of collaborating so intensely with my classmates, which again added value to my knowledge. As a result of both, I was ready to become a holistic leader.

What has been your biggest professional/personal success?

I consider the many successes of my mentees in the context of Shanduka Black Umbrellas, an incubator for black startups, my biggest professional success. Thanks to my parents, my studies at WU Vienna, the support of my former bosses and colleagues, and the opportunity to exchange views and ideas with friends of mine, I am in a very privileged position, and it is great to be able to pay some of it forward to others who have been less fortunate so as to make it a little easier for them to succeed.

My biggest personal success is my family. Professional successes are, in my opinion, the biggest threat to one's values. Very quickly one becomes corrupt, loses touch with reality or takes the path of least resistance. There is absolutely no substitute for a family that repeatedly makes you reconnect with reality - recalibrates you, as it were - and supports you when the going gets tough. Also, a family expects you to be a team player and pull your weight. So, are my wife and my children a success? I prefer to think of them as a privilege I am very grateful for - and this is something I always keep in mind.

My primary professional goal for the coming year is to further stabilize the cashflows of the three companies. It goes without saying that consulting, in all its forms, is a volatile business. The economic climate in South Africa has been improving since Cyril Ramaphosa took office as president in February. In view of this, we have also increasingly been offering our services to clients in Germany and Austria in order to help them benefit from the favorable rand-euro exchange rate.

Privately speaking, an ambitious plan that my wife and I hope to make a reality in some years' time when our children are over the worst is to ascend Mount Kilimanjaro together.

What I consider a “great luxury” is to have enough time on my hands to pick a recipe from one of our many cookbooks, spend hours buying the ingredients and cook for my family.

Two books actually: “My own Liberator” by Dikgang Moseneke, the autobiography of South Africa's former deputy chief justice and “Devil's Island” by Einar Kárason, the story of a big Islandic family living in barracks. Although the latter is fiction, the books share a thread of unfailing joie de vivre and determination to remain in control of one's life, no matter what the circumstances.

As for movies, I have been passionate about Star Wars ever since my youth.

My leadership role models were, first and foremost, my supervisors at KPMG and Clifford Chance, Martin Mahler and Dr. Joachim Schütze. They all pursued a “challenge and support” type of approach. Mistakes were okay and tolerated as long as you learned a lesson from them. If something didn't work or it failed to turn out as desired, they helped you, provided you were honest about the situation and put all the facts on the table. I too have embraced this philosophy. However, the socio-cultural environments of South Africa and, say, Germany or Austria are different, so I sometimes need to marginally adjust it. For instance, the South African society traditionally tends to think in terms of hierarchies (within respective communities, not when interacting with each other). Hence, you can’t expect everybody to be familiar with concepts such as self-responsibility and the principal of subsitiarity but occasionally have to explain their meaning.

Seeing change happen in my immediate personal and professional surroundings gives me strength, satisfaction and the drive to carry on.

Actually, I wouldn't want to change places with anyone because one day simply isn't enough to really appreciate somebody else's life, duties and responsibilities.

Why would you recommend the Global Executive MBA of the WU Executive Academy? What did you like the most?

In hindsight, the most important aspect of the program has been that, under enormous time pressure (after all, you study for your MBA degree while pursuing your career), it allowed me not only to (re-)discover highly interesting topics but also to make friendships that have lasted to this day (this year marks the tenth anniversary of our class's graduation). My MBA studies were one of the most intense times in my life, but I wouldn't want to be without the experience.

My motto in life:
Carpe Diem

I can laugh about:
Trevor Noah's jokes

Shortcomings I am most likely to overlook:
Clumsiness

I would spend my last money on:
A bottle of excellent Chardonnay

In 20 years I will:
Have nothing to regret and continue to enjoy life! 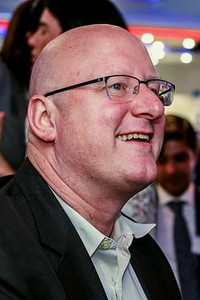