What stages in your life have had the greatest impact on you and why?I graduated from Ecole Supérieure d'Electricité in France in 1994, laying the foundations for my future professional life.In 1997, I started to work for Schneider Electric Romania as a sales engineer for the industry market. This is the second milestone in my career.After two years outside Schneider Electric Romania, I received, in 2010, the offer to head the most important BU, called Power at that time. This is the third major and most significant stage in my career until now.Did you originally want to pursue a career in a different field? If so, why is it that nothing has come of your plans?Yes, I dreamed of focusing entirely on electrical engineering, and my first job was in the high-voltage substation field at Electrica Ploiesti.The opportunity to work for an international company was very much appealing to me, and so I opted for this career path, which I pursue with a lot of passion.How and why did you come to work for Schneider Electric?A very good friend of mine who already worked for Schneider Electric invited me to join the team. After a short interview with the general manager, I was hired as a sales engineer in the heavy-industry field.

What has changed in your career as a result of the Executive Energy Expert program? How did the program support you in reaching your career goals?

The Executive Energy Expert program has opened up new horizons for me in terms of career development. I now have a much better understanding of the big picture of the energy market, especially as far as Europe is concerned.

I wanted to take the next career step in 2015 and am now looking for development opportunities abroad, within the Schneider Electric group.

In 2006, I was promoted to the position of Price Officer for Europe and relocated to Schneider Electric's headquarters in France.

What are your goals for the coming year? Your goals in general? Is there still something you absolutely want to do?

Professionally speaking, I plan to repeat the performance delivered in 2014 and to find a new position abroad, as mentioned before.

Personally speaking, I would like to participate in three carp fishing competitions and to reach the podium at least once. Also, I intend to buy a new professional digital camera so that I can take better photos at social events.

What do you consider a “great luxury“?

Getting more me time.

What was the last movie you really enjoyed?

The Life of Joseph, because I like historical movies.

A military plane pilot, this was a dream of my childhood.

Why would you recommend the Executive Energy Expert of the WU Executive Academy? What did you like the most?

I would definitely recommend the Executive Energy Expert. I liked the negotiation training with Daniel Donahey and the session on energy economics lead by Dr. Martin Schwarzbichler, even though I found it quite challenging.

My motto in life:
never stop doing what you like to do!

I can laugh about:
politicians.

Mistakes I am most likely willing to forgive...
things that are done by mistake, not deliberately.

I would spend my last money on:
fishing tools.

In 20 years I will…
be a consultant supporting companies in their sales activities in the electricity market. 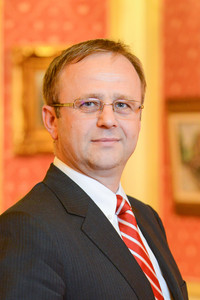