What to keep in mind when booking advertisement.

Facebook finds itself in a very fortunate situation: Popularity is at an all-time high, the vast majority of local and international businesses have their own Facebook company pages. The platform became popular with private users first, then Zuckerberg’s team started luring corporate customers onto the platform, promising enormous viral reach for a steal. Attention is a scarce resource though - with more and more competitors trying to get noticed, the average post reach is rapidly decreasing.

The number of fans doesn’t tell us anything about the actual reach of page which is determined by 2 factors: The open graph algorithm and paid placements.

Only a relatively small fraction of page updates get shown in their fans’ newsfeeds. The algorithm filters these updates based on users’ preferences and those of his friends, leading to a quota of 5 to 12 percent on average. That’s 50 to 120 people per 1.000 fans. Ad campaigns increase this percentage and have thus become an essential tool for increasing brand awareness and generating new leads.

When considering all the data which Facebook collects from its members, a major strength with Facebook campaigns is its targeting features. In other words, success largely depends on a careful definition of your audience.

Ad Manager: self service is mandatory

Personal support and account management requires spending a five-figure amount each month. Facebook actively contacts customers that qualify for their key account program; for everyone else it’s either time to do-it-yourself or hiring an agency. (see https://www.facebook.com/business/help/community/question/?id=10154345490863679)

Of course Facebook tries to make its ad manager as accessible as possible. A step-by-step tutorial helps new users get their first ad up and running in a matter of minutes. In the beginning of 2015 Facebook announced that they had 2 million registered advertisers. Ads can be placed on Facebook as well as on Instagram and in the so-called audience network, a group of publishers who rent part of their ad inventory to Facebook, including big names like The Daily Mirror and Washington Post. According to Facebook, 1 billion users see at least 1 ad a month delivered via the Audience Network.

In order to setup your first campaign, navigate to https://www.facebook.com/ads/manager/ and configure one or more payment options. After you have completed all the required fields, click “new ad” to start your first campaign and choose a goal:

The selection depends on your advertising strategy as well as on the kind of content you want to promote. Facebook offers various templates for local businesses, videos, apps and other campaign types. Enter a campaign title and an optional budget limit. The next step is very important: Defining the right audience is a crucial for your campaign success. You can either define your audience in one of two basic ways, either by selecting demographic criteria such as region, age, sex, language and interested or by setting up a custom audience.

These custom audiences basically consist of customers who already got into touch with your business in the past. There are various ways to create such audiences: Either upload an existing customers database or pick users who interacted with your status updates (i.e. who liked, shared or commented). If you integrate Facebook’s ad tracking pixel into your website, you can even target only those users who visited your homepage before.

An example of the Lookalike Use

Custom audiences are easily extendable via a very powerful feature: Lookalike extends existing custom audiences with users who share similar interests. Sounds complicated? Imagine you have an e-mail list of 500 customers who ordered products from your online shop in the last 6 months. Facebook identifies the known Facebook users via their e-mail address and enables you to target 5,000 people with similar interests – a great way to increase conversion rates drastically.

Next select your placement channels (like Facebook, Instagram and/or Audience Network), set up a schedule and configure your daily budget. Depending on the type of ad you can choose between pay per impression and pay per click. Prices are calculated dynamically depending on current demand.

Finally, configure the actual ad by picking a multimedia format (single image, slideshow, carousel, video or a combination of videos and images), uploading images and videos and wording your claim. Before your ad goes online, it gets checked by Facebook which usually takes up to 30 minutes.

There is no blueprint for killer campaigns, but A/B testing is crucial. Setup and run a couple of campaigns with different images and audiences, for example 10 campaigns/ads at EUR 2 each for a couple of days. Carefully study the results and use whatever worked best for you for your long-term campaign. 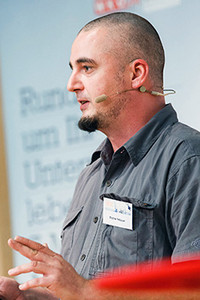 Ritchie Pettauer is an independent consultant, specializing in the creating and implementation of online-marketing strategies. In addition to teaching at the Department of Communication at the University of Vienna and at several universities of applied sciences in Austria (online content management, customer experience management, web analytics), he also holds discussions and workshops on “Corporate Online Marketing and Social Media.” The popular weblog, datenschmutz, has also been part of his work since 2006.  View his full resume on LinkedIn.