Asian finance and logistics hub vs. emerging Latin American economy: Global Executive MBA students have it good - in the future, the program's international Asia and South America residencies will take them not only to Hyderabad (India) and Rio de Janeiro (Brazil) but also to Buenos Aires in Argentina and the Hong Kong region. The City University of Hong Kong is a new a partner of the Global Executive MBA in China in addition to Lingnan (University) College in Guangzhou.

As a result of these innovations, the program provides participants not only with a first-class general-management education but also with an opportunity to experience the special characteristics of the economic, political and social situations in these countries. The EMBA students also make valuable contacts in the course of visiting local and international companies on site.

Hong Kong - the “smart city” in the Pearl River Delta

“Hong Kong is not only a leading metropolis in Southeast Asia and an incredibly strong finance and logistics center in the region but also one of the world's most important commodities hubs. Moreover, the city is the quintessence of digital technologies in general and of fintech, e-commerce and big data/AI in particular. Moreover, it boasts one of the most modern information and telecommunications infrastructures in the world. Our students will experience all this for themselves in the course of company visits and in-class sessions on the ground,” says Prof. Barbara Stöttinger, Dean of the WU Executive Academy and Academic Director of the Global Executive MBA, expressing her enthusiasm about the new study trip.

During the new five-day Hong Kong residency, which is to take place every January as part of the Asia residency, program participants will engage in a wide variety of activities: In the mornings of the first three days, they will attend classes at the City University of Hong Kong. In the afternoons, program participants will visit regional as well as international companies to gain first-hand insights into the special characteristics of the businesses and the markets they operate in. 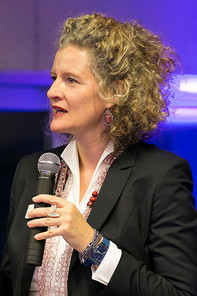 Our new partner has an excellent network of international contacts - including the Carlson School of Management in the USA. Moreover, it is located in the heart of Kowloon peninsula, giving students many great opportunities to explore the city on foot in the evenings when studying is done.

On the fourth day, program participants will travel on to the Chinese city of Shenzhen, which borders Hong Kong to the south. Being one of the first special economic zones in China, this planned city holds a special appeal for foreign businesses: It is one of the fastest growing cities in the world and boasts the country's highest per-capita income. The final day of the residency will take students to Guangzhou, which is 130 km away (a stone's throw by Chinese standards). There, they will be treated to two more company visits - and an evening get-together with their MBA peers from Lingnan (University) College. The MBA students will work together on the Global Team Project, the Global Executive MBA's capstone project, which also involves MBA students from the Carlson School of Management.

Roughly a third of Argentina’s population, approximately 14.5 million people, live and work in Buenos Aires and the surrounding area. One of South America's biggest metropolitan regions, the capital on the Atlantic coast is considered the country's most important cultural center.

In their South America residency, program participants will, in early July, develop a thorough understanding of the unique characteristics of Argentina's economy and business environment:

“Apart from gaining invaluable insight into the special interplay of the economic and the political spheres in an emerging economy such as Argentina, our students will be able to get behind the scenes of multinational companies and their internationalization strategies. Moreover, by working on concrete business cases from the region, they will sharpen their ability to successfully identify business opportunities and to accurately assess economic, business and political risks. But no international residency would be complete without taking in a wealth of non-business-related personal impressions. In Hong Kong and Buenos Aires alike, program participants will have plenty of opportunity to do just that - be it in the course of a joint sightseeing tour to the Sugarloaf mountain, their first steps of Argentine tango or a delicious dim sum meal at the Tim Ho Wan, the least expensive Michelin star restaurant in the world. After all, the residency is also about getting to know one another better and making contacts and friendships that last a lifetime,” concludes Barbara Stöttinger.

Then participants will travel to Brazil for the second part of their South America residency on day four and conclude their international experience in Rio de Janeiro. A final international residency in the USA in New York City and Minneapolis rounds out the program.

For more information about the Global Executive MBA and the International Residencies, please click here!