What executives can learn from the highly successful German soccer coach

With seven games still left to play before the end of the 2019-20 season, it was already clear that the Reds from Liverpool would win the English Premier League after a long 30-year wait. Soccer pundits around the globe soon agreed on the reason for this success: 53-year-old head coach Jürgen Klopp. The German native is a unique figure in the soccer world and much more than just a coach: he is a leader to the core.

Nina Burger holds the records for games played and goals scored for the Austrian women’s national soccer team. Following an international career with numerous highlights as an active player, she recently became the sports director of the women’s segment at First Vienna FC. Prof. Jonas Puck, Academic Director of the MBA Energy Management, has been researching the parallels between professional soccer and business for many years. Read on for Nina Burger’s and Jonas Puck’s analysis of Jürgen Klopp’s six most important leadership skills that are at the core of his success and reputation as a legendary coach. They also explain why this skillset not only does wonders on the soccer field but could also give managers in large corporations a cutting edge.

1. Jürgen Klopp is Confident and Charismatic

Talent, skill, and hard work are all required to beat the opposing team in a soccer match. But Jürgen Klopp is convinced that there is another ingredient you cannot do without: confidence. A team must believe in its strength, skills, and ability to grow beyond themselves. Klopp demonstrates this quality every single day: confidence, a special aura, and the courage of his convictions all contribute to making him the first-rate coach people around the world look up to. When asked about this strength, he sees its roots in his childhood. In an online interview for the charity Kick It Out, he said, “I was full of confidence as a kid. Whatever I did my mother said: ‘Brilliant.’ My father said: ‘Sensational.’ I got filled with love.” This inner strength is not only apparent to anyone who meets him, it is also picked up by his players.

2. Jürgen Klopp Does not Hide What he is Passionate About, Infecting His Surroundings

There are few coaches in the world of professional soccer that can motivate players the way Jürgen Klopp does. Because he knows: for his team to climb to the top, he must connect to his players’ feelings and emotions, have them burn for every single game. This way, they will be able to together accomplish what seemed impossible before. When a fist-bumping Klopp is about to jump for joy at the touchline, suddenly everything seems possible: for the players and the fans. This way, Klopp follows his own advice to the players: be determined to win. “I give everything. I expect my players to give everything. Then we see what we get. That creates the mentality of the team,” he is quoted in the Guardian.

Leadership learning: Recent studies have shown that leaders that are passionate about what they do and love leading are not only happier and more content themselves, their dedication also inspires and motivates their team members, leading to a boost in their performance. At the same time, both managers and employees should not lose sight of the fact that you cannot be filled with passion 24 hours a day. Both in soccer and in business, you need to take breaks to refill your emotional tank.

To him, his players are not just players, but first and foremost human beings. In return, there is nothing they would not do for him. Another strength of Jürgen Klopp is that he is extremely loyal to his players. This is especially true in hard times – if the management, important officials, or fans call for consequences to punish players who made a mistake or fail to perform at their best at all times. He understands his players, tells them what he really thinks, and strives to always see where they are coming from – regardless of whether he is dealing with a talent, an experienced player, or a substitute. He makes sure to talk to his players directly, hugging and encouraging them. What’s more, he is interested in their hopes and fears in an open and unbiased way. Against this backdrop, it is no wonder the players would do anything for Klopp. He is both a coach and a father figure to the team members, who respect and trust him unquestioningly.

Leadership learning: Good leadership is also about allowing or developing exceptional solutions for exceptional situations. Neither professional soccer players nor employees of a company are robots. Affording some space to meet unusual and temporary needs of employees creates an atmosphere of appreciation and trust – as a result fostering employees’ willingness to also put in extra efforts when required in extraordinary situations.

4. Jürgen Klopp Demands That Players put in the Work and Develops Their Strengths as a Reward

“Klopp turns an average player into a good one, and a good one into an excellent one, and an excellent one into an even better one,” the former goalie of the Austrian national soccer team Alexander Manninger recently said. Jürgen Klopp has an extraordinary talent for spotting potential; at the same time, he knows how important it is to give players enough time to mature.

As a coach, he does not consider himself higher up in the hierarchy than the players. He does not pressure them but is patient and gives them space to make mistakes and develop over time. While still in Dortmund, he turned rather inconspicuous players such as Mats Hummels and Robert Lewandowski into stars. But he does not only strengthen and support players, he also demands a lot: nothing less than 100% will do. “If you are full of motivation as a player, if you are full of concentration… I am open arms,” Klopp announced when he arrived at Liverpool. “If you are not, of course [I am hard], but only because to work with players who don’t understand the professional part of this life is a waste of time,” he was cited by redbulletin.com. There is no doubt that this combination of openness and open-mindedness with clear goals that are achievable for everybody contributes to Klopp’s exceptional success story.

Leadership learning: Clearly measurable, unambiguously communicated, realistic, and achievable goals motivate employees and create a foundation for transparent performance assessment. Putting a strong focus on dedication as an assessment criterion in companies is particularly meaningful in settings where a good selection of staff ensures that all employees are able to deliver top performance.

5. Klopp Believes in Continuity and Selects “New Material” in His Own Special Way

Jürgen Klopp is not the only one who has been with Liverpool FC for close to five years. The team’s inner core has hardly changed for quite a while either. This makes for continuity and a mature team. When new players join the team, Klopp seeks the advice of scouts but also makes sure to personally talk to the player in question before a transfer is decided. Regardless of the player’s talent or skill, only if Klopp gains the impression that his personality matches the team and that he would “click” with the others, the transfer receives a go. For such decisions, Klopp does not only rely on his scouts but also trusts his gut, which, he reports, has never betrayed him in the past.

Leadership learning: When it comes to leadership and HR decisions, trusting your gut means also considering decision criteria that are hard to measure and can only somehow be “sensed” as relevant. Naturally, decision-making in both soccer and management is shaped by figures and calculations today – but if the chemistry is not right, processes simply will not run smoothly. Not only carrying out a detailed analysis but also trusting your gut in the end is in no way unprofessional but should be interpreted as a sign that collaboration is valued very highly.

6. Jürgen Klopp Has a Clear Strategy – but is Always Willing to Learn Something New

Jürgen Klopp has a pretty clear idea of what well-played soccer looks like. He uses trusted methods, which he cautiously adapts to new settings as needed. Soccer fans could already witness many elements of Liverpool’s style of play in Dortmund and even Mainz. Other strategies were newly developed in Liverpool but were never intended to revolutionize the core idea. Instead, new elements are a continuation and further development of existing components. Thanks to this continuity, every player always knows what he has to do at any given point. Klopp focuses on the moment and the current game to be played, but he also makes sure to keep the overall and long-term strategy in mind. As a result, he and his team feel very strong both when they win but also and especially when they lose, as they always have a clear path set out for themselves.

Leadership learning: Managers who have a clear strategy for how they want their teams to collaborate clearly communicate to their staff members what they expect with regard to work processes and performance. As a result, losses caused by friction are reduced, and the team cooperates more efficiently. For employees with special skills or in extraordinary situations (such as the one caused by the Covid-19 pandemic), it is always a good idea to reassess and adapt structures and processes.

Jürgen Klopp is both an exceptional coach and an exceptional leader, who can serve as a role model for everyone leading others – Nina Burger’s and Jonas Puck’s analysis has shown as much. To conclude, they emphasize one more point: “We believe that everybody who is willing to learn and adapt, can lead like Jürgen Klopp does, at least to some extent. What we have discussed so far shows that many of his skills would be success factors also in a business setting. But that does not mean that you should simply copy his behavior. Instead, managers must make sure to be authentic and at the same time stay open to further develop their own ways to eventually end up with a sound and efficient leadership style.”

With our short programs you can also become a successful leader. For more information,please click here. 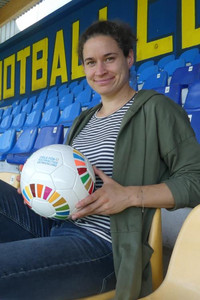 Nina Burger holds the record for games played and goals scored for the Austrian women's national soccer team and is sports director of the women's segment at First Vienna FC.