Royal Leadership – What We Can Learn from Queen Elizabeth II

A role model for everyone

There is one thing that even the most ardent royalists and convinced republicans will agree on: Queen Elizabeth II was one of a kind – a role model who embodied authenticity, consistency, and the courage to do things differently.

As millions of people are mourning the end of this extraordinary queen’s reign, Barbara Stöttinger, Dean of the WU Executive Academy, has taken a closer look at Elizabeth II’s remarkable leadership style, examining why she is a role model not only for past but also and particularly for future generations of managers.

Elizabeth’s improbable 70-year reign not only makes her the longest-serving monarch of the United Kingdom, she also comes in third in a global all-time ranking of long-term sovereigns, following King Sobhuza II, who ruled Swaziland for 82 years, and King Louis XIV in France (72 years). For more than 70 years after she succeeded her father, George VI, whom many millennials will remember from watching “The King’s Speech,” she was the “rock of strength (...) as the sands of culture shift and the tides of politics ebb and flow,” as former Prime Minister David Cameron once put it, until her death on 8 September 2022. She was a strong leader in good times and in bad times, remained positive and hopeful through it all, and hardly ever took a day off from her royal duties throughout her long reign.

The WU Executive Academy’s Dean Barbara Stöttinger asked herself the following question: “How would the Queen herself have defined successful leadership? At one of her rare addresses at the United Nations in New York in 2010, she said: ‘I know of no single formula for success, but over the years I have observed that some attributes of leadership are universal, and are often about finding ways of encouraging people to combine their efforts, their talents, their insights, their enthusiasm and their inspiration, to work together.’ And that is just spot on,” Stöttinger comments.

So what are the most important leadership learnings Elizabeth II can offer managers? Read on for a quick analysis of 6 key leadership skills the late queen possessed.

1. Resilience and the Ability to Adapt

In the many years during which Queen Elizabeth II served as her country’s sovereign, she experienced everything a human being potentially can during a lifetime. Wars, nuclear catastrophes, terror attacks, private tragedies, and the coronavirus pandemic: all things that fundamentally changed life as we knew it all over the world. Last year, her husband passed away only months short of his 100th birthday; still, the Queen was back on duty shortly after. She appointed as many as 15 prime ministers. Weathering an immense number of changes and challenges throughout her life and reign, she showed an extraordinary amount of resilience and adaptability.

Leadership Learning: Queen Elizabeth II is perhaps among the first role models when it comes to contemporary brand management. Throughout her reign, she remained consistent and true to her principles but also reinvented herself time and again. At the end of her life, she was still herself, if you will, but also an entirely different person. 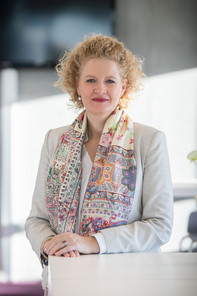 There were times when the Queen simply “powered through” in the face of tough challenges, and then there were situations in which she changed her course, heeded advice, or admitted that she had been wrong – all qualities shared by successful managers today.

... as the Brits say! While you are probably familiar with this slogan, perhaps you did not know that it was originally advertised by the British government in 1939 in anticipation of heavy artillery attacks by the Germans. Against the backdrop of the current war in Ukraine, the coronavirus pandemic, and the most serious economic downturn of the past decades, it seems more timely than ever. Elizabeth ascended the throne due to an unexpected turn of events. After her uncle Edward’s abdication, her father, King George VI, died from complications following a thrombosis only some years later, making Elizabeth queen at the tender age of 26. Equipped with the stoicism of her ancestors, she understood already then how important it would be to meet royal duties despite demanding circumstances in order to secure the future of the royal family.

Leadership Learning: “There’s truth in the saying that ‘slow and steady wins the race.’ Staying calm in the midst of chaos counts among the most important skills managers need,” Stöttinger says. “When things get hectic or uncertain, we tend to rush in order to satisfy our wish for a quick solution and clarity. The better way to go, however, would be to gain some perspective to avoid rash decisions. Managers who are able to keep their nerves in exceptional situations help their team members to stay calm as well. As a result, the team will not be guided by emotions but have sufficient space to carefully consider decisions and act effectively.”

3. Serving as a Role Model

A particular strength of Queen Elizabeth II was to courageously use the soft power of a female monarch and demonstrate leadership by example, even when there was resistance within her own ranks. An example is her 1965 visit to Western Germany, twenty years after the war, through which she turned the page in the long reconciliation process between the UK and Germany. More than a million people cheered for the Queen on the streets. Throughout her reign, she continued this mission to reunify the continent. Many years later, in June of 2012, she shook hands with Martin McGuinness. This symbolic handshake with the former IRA leader ushered in a new era after 40 years of bloodshed in Ireland.

Leadership Learning: Positive change is not always brought on by great revolutions. Sometimes it’s the little things that kick off a chain reaction resulting in transformation and innovation. “I’m thinking about the Queen’s address to parliament following the Brexit debate. She was dressed in a bold blue suit and her hat was adorned with yellow flowers – a clear demonstration of her view regarding the European Union for many outside Britain. She neither wanted to nor could she voice her opinion, which is why she relied on the power of symbols. This is a strategy that can also help managers show their true colors in a subtle way when a particular situation requires is,” says Barbara Stöttinger.

Probably the Queen’s most important leadership tenet and originally the motto of the Sandhurst military academy, this principle is about leadership being an act of service, more specifically a service to the people one leads in order to work towards a common goal. “Queen Elizabeth II embodied this leadership principle like no other: She considered herself a servant to her people, not their leader. She encouraged their efforts and, – which was perhaps most important and inspires me so much – she had a special way of approaching people, always showing a great deal of patience and sincere interest,” Barbara Stöttinger says.

Leadership Learning: Leadership is not about the function per se but about if and how a person embodies this role in real life. What are my convictions, values, and guidelines as a manager; and how do I want to perform my role? A position lends authority to the person who holds it, but staff members’ trust is gained through the way a manager acts and leads. “Servant leadership is about serving people and organizations, supporting them instead of exploiting the role or position for one’s own interests.”

People who worked closely with Queen Elizabeth II, be they staff members, advisers, or the UK’s 15 prime ministers in power during her rule, were unanimous about another quality of this remarkable woman: she was an excellent conversationalist who did not leave anything to chance but understood subject matters in depth, always staying informed and up to date. Whatever the event or who she was scheduled to talk with, she prepared meticulously for every occasion.

Leadership Learning: Doing your homework before meeting with colleagues shows your respect for them while keeping you in the know about current topics. “Managers who have a good grasp of their environment and markets and what’s happening there make better decisions. We also see that people who are well prepared are more curious when they encounter new things and view changes as opportunities rather than threats. Unfortunately, many executives still engage in too much navel-gazing. And that’s a sure way to miss trends, innovations, and opportunities for development in general,” Barbara Stöttinger explains.

6. Getting the Hang of New Technologies and Innovations

Elizabeth had a knack for putting new technologies to use from the early days of her career. When she ascended the throne in 1953, she insisted (against the advice of then Prime Minister Winston Churchill) on the coronation ceremony being broadcast. And rightly so: the mega event, the first of its kind to ever be broadcast live on TV, attracted close to 300 million viewers around the world. In 1976, more than 20 years later, she was among the first country heads to send an electronic message (i.e., an email). Throughout her reign, she kept up with technological advances. She proactively adopted new technologies – at times in opposition to the conservative forces around her –, which eventually not only increased the monarchy’s significance, she also learned to use digital media as effective platforms to convey her own messages.

Leadership Learning: Having a thorough understanding of how change contributes to improving an organization’s structure or how incorporating new ideas can make you more effective as a manager is a must-have skill for leaders. In this respect, it’s important not to overwhelm people and the organization but to find a reasonable balance. “Particularly when we have just started out in a management position, we are tempted to tear down and rebuild everything from scratch. That’s a legitimate desire, but also here, less can be more. Or, as Peter Drucker said: do the right things instead of doing things right. In this context, the most important questions for managers to ponder are: Where will innovating and using technology generate benefits? Will it reduce red tape and make it easier for people to collaborate? And, finally: which perspectives can be gained from digitalization and change that were inaccessible in the past?” Barbara Stöttinger says.

The Queen Is Dead, Long Live the King

“If there were such a thing as a predisposition for great leadership, the former Prince of Wales, now King Charles III, would have won the genetic lottery. From various research studies on this topic, however, we know that leadership skills are mostly acquired and improved over time through interacting with other people (leaders) and implementing the new knowledge and skills in practical situations. In any case, Charles would have had ample time to talk shop with his mother and other leaders. We will have to wait and see how the new king will put his skills to use in the coming years.” Barbara Stöttinger concludes, “Chances are that the royal family has brought forward yet another great leader ....”