The first happened in 2006 when I decided to move from the public to the private sector. It was a major step in my career that led me towards a new industry, which brought lots of challenges and learning opportunities as well. The second moment was when we started our family, with my first son being born just one year later. This added more challenges to the agenda in terms of being able to simultaneously deal with both career and family commitments. At the same time, striking a good life-work balance became more important. I could easily add several other moments to the list, such as the first time I took over a management role or when I accepted a job outside of my home country.

I cannot say so. As a fresh graduate, I was not very clear about where I wanted to go, but for sure I had big hopes looking forward. At some point in time, I joined the energy industry, and I realized pretty soon that this was something I wanted to be part of.

How and why did you come to work for OMV Petrom S.A.?

My previous job was in the public sector. Quite soon, I realized that I fit better with the private sector, and so I started to look for an opportunity. I found this opportunity at OMV Petrom S.A., and I am glad I embraced it.

One of the most important benefits of the MBA program is the knowledge you acquire. And this is something that stays with you for life and opens up new opportunities. The networking is also a very important part of the program, offering students the opportunity to meet highly qualified professionals and professors. I had the chance to meet new people coming from various parts of the world. Eventually, we became friends, and I have to say we had quite a great time together during the program (even though it was challenging from a learning point of view). We also had a great international module in the US that made us stronger as a group. Some of the professors were also astonishing: professionals that you can look up to and feel somehow disappointed when the class ends as you remain with a strange feeling that the time passed too fast.

From a personal perspective, my family is my biggest success. They give me the energy and support I need to pursue my career plans. Professionally speaking, the most important achievement is that some of my team members have been promoted to management positions, and they are performing really well. I feel I was a part of their development and am really glad to have had the opportunity to lead them.

In the coming period, I will devote a lot of attention to supporting the company in overcoming the current market environment, which is not the best we have ever seen.

To be able to take a one-month holiday to attend the Champions League final, take my wife to the New York fashion week and enjoy a trip to Legoland with my son. :-)

What was the last movie you really enjoyed?

I like Tarantino’s movies in general. And whenever a new one is coming out, I am among the first to book a ticket.

My philosophy is that teams are better than individuals. That is why I have always put special emphasis on one thing: to create the right environment for high-performance teams to develop and to support them as best I can. I do not have a role model, but I definitely like to explore various leadership success stories. Every one of them teaches you something that you can implement in your work as an executive.

I spend time with my friends and our families. We either go on a weekend trip or simply enjoy each other’s company. I need to tell you that we are quite a large group of up to 50 people, including the kids in the last few years. With some of them, I have been friends for 20 years now, so you can say we are almost like brothers. :-)

I could very well imagine changing places with Leo Messi during a Champions League final or with Stephen Curry on the day of the deciding game in the NBA finals. Imagine what it would be like to feel the vibes and the adrenaline of playing such a match!

Why would you recommend the MBA Energy Management of the WU Executive Academy? What did you like the most?

First of all, energy represents the past, the present and the future at the same time. I doubt that without energy mankind would have progressed to what we reached today. The program itself is “one of a kind”, bringing together the core business modules with additional ones focusing on energy. The program is very well designed and allows you to balance your professional, family and academic commitments. It includes an amazing international module. Last but not least, there is a bonus as well: new friends for life, from so many different parts of the world.

My motto in life …

‘If you believe, you can achieve!’

I can laugh about …

Shortcomings I am most likely willing to overlook …

I would spend my last money on …

Be part of a better world and hopefully wiser than today. 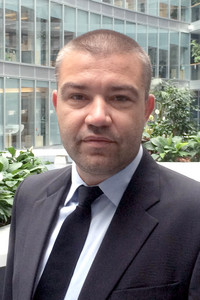 Florin Cioc, MBA works at OMV Petrom S.A. and is an alumnus of the MBA Energy Management.