From South Korea to Vienna, with a stopover in Cannes

When you think of the most talented high potential in your company, what 3 pieces of advice would you give him to live a successful and fulfilling life? First of all, I’d suggest to change the wording of this question to “him/her”. Also I’ll imagine that the person is a fellow woman, since there are many advices for men from other successful men out there already. Don’t be afraid to listen to emotions of everyone including yourself, and to use that as one of the factors for your decision making. Don’t undersell yourself, ever, especially to yourself. Whenever you want to do something but feel slightly scared, that’s exactly the thing you SHOULD do. The fact that you’re scared means that it’s something that pushes you out of your comfort zone, which will certainly make you grow - no matter the outcome. And the fact that you still want to do it, means that it’ll let you grow in the right direction, where your heart really lies. Using just 5 words, how would your team describe you as a leader? I actually asked my team and they were too nice and came up with:

Empathetic, innovative, inspirational, super supportive, badass negotiator I’m super honored! What has changed in your career because of your MBA degree? How did the program support you in reaching your career goals? What concrete career opportunities have opened up for you? My MBA degree literally helped me become a better leader. It reinstalled my self-confidence that had plummeted down after the burnout and made it even stronger than before. Not only did I become promoted after the MBA to management level in my company, I was also able to instill many of the learnings, contacts and most importantly the confidence I’d regained into my nonprofit job as well. The MBA gave me the factual knowledge I seriously needed for higher level corporate management and also exposed me to countless valuable contacts and networks that opened amazing new doors for me in every possible sense – including being invited to be keynote speaker in various conferences and events, teaching possibilities, and of course new exciting projects and partnership opportunities. As far as the workload is concerned, how did you manage an MBA next to a demanding job and your family life? I can say I definitely had it easier than some of my female colleagues who were working mothers since I do not have children, and I have my biggest respect for these colleagues who still pulled it off amazingly. However, at the end of the day I think another great thing you get out of MBA, for everyone, is learning to manage your time much, much better than you could before – since you’re forced to juggle numerous high-priority things at the same time, all the time, nonstop for two years. What do you consider a “great luxury”? I think the greatest luxury a person can have is curiosity. I have witnessed time over time, how people with an abundance of curiosity, no matter how old they are and where they currently may be, keep opening new doors - and grow as a result. Growth can be measured in many different ways, but every single type of growth only starts when you open doors – and not everyone manages to keep having a high level of curiosity throughout their life.

What was the last book/movie you really enjoyed? Trust Exercise by Susan Choi, the Pulitzer-nominated, Korean-American author. If you’re into contemporary literature, you’re in for a real treat here. If you could change places with anyone for a day, who would it be? Someone from 2519 – so that we could see what Earth looks like then. – I have to be honest here, this idea just came from one of our team members, Lukas Binder, our Account Director at KTHE, who is one of the best highly talented individuals in our industry that I’ve had the pleasure to work with.

I can laugh about:
Myself, and also my cats’ stupid poses. (They’re adorable too)

Shortcomings I am most likely willing to overlook:
Not being SWISSARMY-punctual. I’m always overoptimistic about time and end up being slightly late. Did I say I’m number-blind?

My funniest/most exciting travel experience was:
There are many crazy episodes, but one of the most memorable is from when I went on a business trip to the middle of the Amazon Rainforest in Brazil and visited the local tribes for two full weeks for a film shooting. The whole crew stayed in a hotel that was on a boat which was floating around the Amazon river, and we had to take small paddleboats every day for two hours in one direction to reach the hidden villages where the tribes were living. This is also the time when I woke up super early one day to go for a swim in the Amazon River and had the amazing luck to actually touch a pink dolphin during the swim. And I’m not making it up - yes there are pink dolphins in the Amazon rivers. They’re not actually pink though.

I could not live without this app on my cell phone:
Calendar. During the MBA I started a new habit which now I cannot properly function without. I put all my professional & personal appointments and even my own to-do-lists all on my calendar, with allocated timeslots for each individual task. Try it, it’s super effective and helps you set realistic goals!

You can always find this in my fridge:
Kimchi, what else?!

I would spend my last money on:
Catfood.

10 years ago, I thought:
Facing my 30s, I thought I was so adult and super grown-up.

Today, I know:
That I’m still super immature and still have too much to learn – but I also know now that being older means not bossing people around just because I’m older, but being able to genuinely help, support and inspire younger people around me. 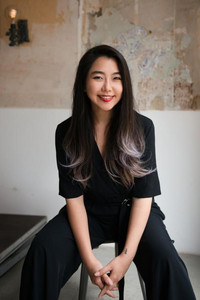