Are megatrends a boon or a bane?

When history repeats itself: In the 1980s, it was globalization; today, it is digitization. Both megatrends instill(ed) collective fear in people's minds, causing them to forget just how much the positive outweighs the negative, despite all the potential threats. In the following, Prof. Barbara Stöttinger, Dean of the WU Executive Academy, explains why the fears regarding these two megatrends are perfectly understandable but utterly counterproductive.

The end of idiosyncrasies is near. That is the key message of a famous article that Harvard professor of economics Theodor Levitt published in 1983. He maintained that while companies had to invest a lot of money and resources in adapting their products to local markets in different countries, global companies pursued a promising strategy, namely to simply roll out, on a global level, the same products that everyone wanted. This article fueled fears by painting a gloomy picture of the emerging phenomenon of globalization that, it was argued, had the power to completely destroy local businesses, unsettle markets, overwhelm consumers with a flood of standardized products and threaten economies.

Seeing the opportunities, not the threats

“At the time, everybody assumed that globalization would turn out to be something terrible and that big brands and corporate groups would be the only ones to survive,” recalls Barbara Stöttinger, Dean of the WU Executive Academy. “Collective fear was noticeable in much the same way as it is today when it comes to digitization. But neither globalization nor digitization is a matter of fate. They are made by people and can thus be shaped by them.” The fears of globalization are justified only to a limited extent. Nowadays, national economies are closely interdependent as a result of intense import and export trade, and political decisions - such as US plans to impose tariffs on European cars - can indeed have significant repercussions. It is also true that the financial crisis and in particular the Lehman bankruptcy in the USA in 2008 had a massive global impact. But in the final analysis, neither globalization nor digitization is intrinsically bad. “We as researchers, business leaders, politicians and citizens are responsible for what we make of them,” says Barbara Stöttinger.

Here is why we should not allow our fears to take over:

1. In the medium term, the advantages outweigh the disadvantages

Globalization is not a new phenomenon. It began many centuries ago with the onset of international trade following the discovery of the New World. In Roman days, oriental spices and silk came to the West from Asia and the Orient. Starting in the late 15th century, the conquistadors brought diseases to the New World and gold and silver back to Europe. Trade has always made markets thrive.

It is thanks to the globalization that we have seen in the past 30 years that poverty has been reduced around the world, more people have been given access to education and economic growth has increased. And: If countries were not economically interdependent, major wars would arguably be much more likely.

There is evidence to suggest that digitization, too, is beneficial for society as a whole. According to the Bertelsmann Foundation, companies have seen their transportation and communication costs drop massively. Moreover, digitization has helped boost economic growth. “Headlines such as ‘One job in four is at stake’ reflect, if anything, only half the truth. Unpleasant routine tasks get digitized, and this is true for jobs on any levels,” says Barbara Stöttinger. But: “Many new careers will emerge. Data scientist, for instance - a profession with a very bright future.” Incidentally, this is one reason why the WU Executive Academy has developed a special training program for aspiring data scientists. When you look back, you can also clearly see that digitization creates opportunities: The first online advertisement was published in 2008 in Austria and came as a great shock to offline-marketing professionals. Ever since, online agencies have been prospering, and here, too, new job opportunities are emerging. “The important thing is to keep your finger on the pulse of digitization and capitalize on its potential,” says Barbara Stöttinger.

2. Every movement gives rise to a countermovement

Global brands are omnipresent. All the shopping streets of all the world's metropolises seem to have the same fashion chains. Cheap products from China deprive small regional craft businesses of their livelihood. That’s nothing new. But as our awareness of these facts increases, the pendulum starts to swing the other way: There is a rising demand for regional, high-quality products, particularly in urban areas in the West. People prefer regional luxury to cheap, globalized goods.

When it comes to digitization, there is a similar trend calling for greater consciousness as far as our use of the Internet and our digital habits are concerned. The phenomenon of what is known as digital detox makes employees and managers flock to the solitude of the mountains or the woods in a completely analogous manner. Awareness is on the rise. In today's fast-moving world, people are eager to refocus on the moment and introspect. What is important with regard to the phenomena whose repercussions are said to be so negative, is to keep things in perspective and deal with them accordingly. Besides the Internet, there is its illegal counterpart, the darknet, where people trade in contract killings, weapons and drugs. But: “Nobody would ever seriously consider shutting down the Internet because of this,” says Barbara Stöttinger. “The important thing is to take action to counteract negative effects early on. And this, too, is something where we all have to do our part.”

3. Globalization and digitization are catalysts for innovation

The latest cancer therapies, robots that make it possible to perform minimally invasive surgical procedures, drones that help save lives, real-time communication via smartphones, AI assistants, self-driving electric cars, mobile money transfers: The list of innovations in the course of digitization is endless. Research advances in fields like medicine, ecology, transportation or robotics could never have been made at such a pace without the communication tools brought forth by digitization. Thanks to the fact that we live in a globally interconnected world, important products and services can be made available to people around the globe, including those based in what is known as developing countries and emerging countries. 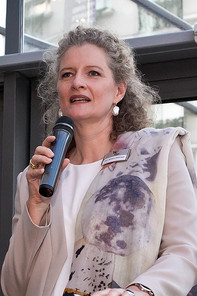 Without digitization, many innovations would not have been possible, and without globalization, many would have very little impact.