Vienna, My Love: Studying in the Heart of Europe

Vienna is the best city in the world to live in according to a global study – and it is also a particularly good place to study and work. Barbara Stöttinger, Dean of the WU Executive Academy, gives a very personal account of why she loves the city of song so much.

“Call, call, Vienna mine. Call night and day with your songs divine! Make all my wonderful dreams come true. My heart belongs to you!” In 1912, Rudolf Sieczyński composed this song, which rose to fame in the First World War and even featured in the Hollywood blockbuster “Eyes Wide Shut.” Mercer’s annual ranking of international cities confirms the composer’s view. Vienna is assessed as an outstanding place when it comes to quality of life: in 2019, Mercer named Vienna the world’s best city to live in for the tenth time in a row.

Barbara Stöttinger, the WU Executive Academy’s Dean, fell in love with Vienna when she first moved to the city as a student. She went on to travel almost every corner of the world, only to finally return to the city of song. To her, Vienna combines all the advantages international students could wish for in terms of studying, traveling, working, and networking:

There are few cities where history is as alive and long-gone eras as palpable as in Vienna. This is not only the case in the city center: buildings with beautiful Baroque, Neoclassical, Renaissance Revival, Art Nouveau, or Bauhaus fasades can be found throughout all districts. Remnants of the Imperial and Royal monarchy are everywhere. “The buildings along the Ringstrasse alone are magnificent and absolutely worth a visit,” Barbara Stöttinger marvels. The beautiful cityscape has not gone unnoticed by Hollywood either: not only James Bond movies (The Living Daylights, Spectre) but also the romance “Before Sunrise” and the blockbuster “Mission: Impossible – Rogue Nation” were shot in Vienna. “There are so many sights worth seeing and there’s such a rich variety of historic ambience as much as an urban feel to the city,” Stöttinger says. She particularly enjoys taking a stroll in Schönbrunn Palace’s gardens. “I simply cannot get enough of the architecture and vast park and gardens.”

“Vienna is so varied; the city has so much to offer, catering to all tastes,” Barbara Stöttinger says. Have breakfast at the charming “Kleines Café” (literally: little coffeeshop) on picturesque Franziskanerplatz square, then watch the Lippizans perform their morning routines in Hofburg Palace, walk down Ringstrasse with its many monuments, get some fruit and vegetables at Naschmarkt market, enjoy a cup of Melange (a Viennese coffee specialty) on the rooftop terrace of the Aqua Terra Zoo (Haus des Meeres), followed by some shopping at the little boutiques in the hipster district of Neubau. Then head to the Danube Canal to relax in a deck chair and dip your toes in white sand as you toast to the good life or visit the stylish Eden Bar in the city’s center, a real gem from the Roaring Twenties frequented by stars such as Romy Schneider, Alain Delon, Orson Welles, and singer Falco. Barbara Stöttinger’s personal tip for everyone who is new to Vienna: “Spend your evening strolling through the first district, the Bermuda Triangle with its many bars and clubs, or listening to some live music at the Danube Canal: you will quickly make new friends.”

3. Forests, Mountains, and a River Within the City Borders

The city of Vienna’s “green lung,” the Vienna Woods, borders on the city’s outskirts and invites hikers and strollers to explore the rolling hills with breathtaking views of the city’s vineyards. The parts of the Danube called Old Danube and New Danube and the Lobau nature reserve are where locals go for recreation and swimming in natural bathing sites. Almost 100% of the city’s drinking water is fresh spring water originating in the Lower Austrian-Styrian Alps. In the “Europe’s Greenest Capital Cities” ranking by comparethemarket.com, Vienna recently took first place ahead of 24 other European capitals. The ranking is based on criteria including water and air quality, quality of life, bikeways, and a city’s public greens – an impressive 43% in the case of Vienna.

Lovers of the arts are spoilt for choice in Vienna: a ballet or opera performance at the Vienna State Opera, marveling at the works of the old masters at the Albertina museum, musical bliss at the magnificent Konzerthaus concert hall, a night of jazz at the Porgy & Bess, modern art at the Museum of Modern Art (mumok) or the Gustav Klimt and Egon Schiele collections at the Leopold Museum at MuseumsQuartier Wien. “My personal favorite is the Museum of Art History (KHM) with its glorious dome,” Barbara Stöttinger shares.

More than 1,200 large corporations, among them Henkel, Siemens, Unilever, and Beiersdorf, have chosen Vienna as their CEE hub from which they reach countries to the east and west. Vienna is also home to the IAEA, the OPEC, and one of the four UNO headquarters. Since 2012, record numbers of foreign companies have established locations in Vienna. Last year, as many as 266 companies moved to Austria’s capital and invested an overall sum of 731 million euro, effectively tripling the investment sum of 2018. Start-up hubs such as weXelerate, Talent Garden, and Impact Hub Vienna attract numerous start-ups from CEE countries. WU’s campus also offers a technology hub. 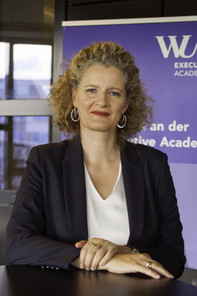 It will likely pay off for executives and MBA alumni to keep their eyes peeled for new job opportunities offered in this hub.

6. Smart City of the Future

When it comes to innovation, Vienna is quickly catching up: its declared goal is to become a smart city. The Smart City Agency coordinates and supports digital projects and products in the fields of e-mobility, e-health, social services, smart traffic management, sustainable architecture, and climate protection. The agency was established by Vienna’s city government to drive technological and social innovation. As a result, Vienna took first place in the Roland Berger Smart City Index 2019, which assessed 153 cities around the globe, even overtaking London.

7. Campus in the City’s Green Lung

Studying at the campus of the Vienna University of Economics and Business is a unique experience. It is located on the outskirts of the Prater Park, which includes six square kilometers of woods and meadows and an amusement park. The adrenaline-powered yells of visitors of the rides often travel all the way to the campus. “I always have to smile when I hear these outbursts of joie de vivre at this site devoted to working and studying, and looking out into the green is an added bonus,” Stöttinger says. When they are not listening to interesting lectures in the multi-functional lecture hall in the modern, semi-transparent tower that houses the WU Executive Academy, students can have a coffee or study at the Library & Learning Center designed by the late star architect Zaha Hadid.

Graduates who have fallen for Vienna in the course of their studies should look for a job in the city. EU citizens do not require any paperwork to this end, and nationals of third countries can apply for a Red-White-Red Card upon graduation. The card is issued following a check ensuring that the applicant has suitable qualifications, adequate means of subsistence, housing, and insurance coverage. It enables third-country citizens to live in Austria and work for a specific employer for 24 months. Foreign executives and prospective expats can also contact the Expat Center of the Vienna Business Agency for advice and support regarding their relocation to Vienna.

In addition to these 8 reasons that speak for Vienna, you can also find 8 reasons for the WU Executive Academy here.