Why "positive leaders" stand out

And why they are the better executives

Inspiration instead of motivation: Recently, the WU Executive Academy was privileged to welcome Jan Mühlfeit, global strategist, coach, bestselling author and former Chairman of Microsoft Europe, on the occasion of an MBA Alumni Lounge. In his keynote speech, he gave an inspiring analysis of the future of leadership and explained why “positive leaders” are the better executives.

Many MBA students and alumni have turned out to attend the WU Executive Academy's MBA Alumni Lounge and listen to a particularly inspiring speaker: Jan Mühlfeit. A Czech national, he spent 22 years working for Microsoft; in 2000, he became Chairman Europe, assuming responsibility for the technology company's business operations in Europe. Moreover, he is the author of the book “The Positive Leader”. His charming personality, entertaining anecdotes and inspiring food for thought regarding transformation and leadership are guaranteed to rivet the current and former MBA students gathered at the WU Executive Academy. Today, Jan Mühlfeit, who used to work with Bill Gates for many years, not only coaches top athletes, YouTubers and beauty queens, but, being a much-sought-after global strategist, also advocates the philosophy of “positive leadership” in many countries. He has even written a bestseller about it: “The Positive Leader” outlines how executives can unlock their own potential as well as that of their employees.

Inspiration instead of motivation

“Positive leaders find the best in themselves, their talents. They also see them in their employees and bring them together in such a way as to create synergies and unlock human potential,” says Jan Mühlfeit. He advocates moving from the concept of motivation to that of inspiration: “The problem with motivation is that it operates only at a logical and rational level and that the motivated have their sights set on externals—on making more money, on winning another medal, on having more success. What these people lack, though, is an in-depth emotional connection with what they do.” According to the expert, individuals who focus solely on outcomes will never be able to achieve lasting success, but those who have powerful visions of the future can inspire others: “If people believe in what you are believing in, you can change the world.” Jan Mühlfeit says that when he joined Microsoft a quarter of a century ago there were many who did not believe in the visions of its founder, Bill Gates. “But at some point, people began to believe in what he was believing in. And it was the same with Steve Jobs or Gandhi.”

The most important skill of the future: the ability to learn

Jan Mühlfeit's take on digitalization is exciting: “We are living in a digital paradox. Technologies are becoming everyday commodities, the norm. What really matters when it comes to achieving corporate success is not technological progress but the ability to unlock human potential.” The most important corporate skill of the future, according to him, is the ability to learn, which is “a function of each and every individual's ability to learn”. Being able to make the most of our strengths and potentials allows us to achieve what positive psychology calls flow, says the expert. “When you are doing something challenging but have talent for it, you experience flow. The fact that you become one with your task elicits the feeling of time flying by,” explains Jan Mühlfeit, adding that recent brain research shows our minds are at alpha level while we are experiencing flow. Alpha level is a state of relaxation in which we are present in the here and now—just like playing children, who do this naturally. He also points out that, according to a McKinsey study, individuals who achieve flow perform 500 percent better, learn 450 percent faster and are 400 percent more creative.

The biggest killers of potential

Jan Mühlfeit then goes on to say that, unfortunately, in everyday business life people rarely experience flow. He quotes an international Gallup study according to which 87 percent of employees dislike their jobs; of these people, “42 percent go to work feeling irritated and irritating everyone else there.”

It is against this backdrop that he outlines 4 major mistakes that prevent individuals, businesses and countries from unlocking their full potential:

As far as providing feedback is concerned, he tells the MBA students and alumni: “Not all feedback has to be positive. What is important, though, is that you first show your appreciation and then outline to the employee in question where there is room for improvement.” Moreover, he offers the executives in the audience the following piece of advice: “You cannot change people. But you can make them realize who they are.”

You can find pictures of the event in our gallery! 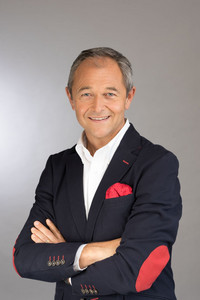 is a global strategist, coach, mentor and author of the bestselling book "The Positive Leader".