As everyone is talking about innovation, you prefer reinvention: is it another buzzword?

Zhexembayeva: The idea was not to choose another word; I realized that in companies, innovation was not doing the job. You give people training, but it is always a small percentage, who starts reinventing new things. How many Steve Jobs have you met in your life? Statistics say that only 2.5% are innovators, another 10 or 15 percent are early adopters. The first iPhone: a few invented it, a small group tried it out, and only when they liked it and told their friends, was it good. For me, this was not enough. We are facing physical disruption in terms of lack of resources, we are facing political disruption, and technological disruption with artificial intelligence. If I tell you, invent an innovative way for transporting 5 pounds of goods, what would you say? Innovation makes us scared. Yet if I tell you, here is a bag, what would you like to change? You will have ideas: the design, the material. This is the difference between innovation and reinvention. One small improvement is the beginning of the development of the reinvention muscle; 99% of us can do it. With reinvention you make it less scary, you make it nearer to people’s life. You start with one small step.

Zhexembayeva: In our job, the most interesting part is the process; the content is usually clear as there are plenty of experts in the company. They have the idea, but they do not have the process. We are not consulting; we don’t recommend strategies. We come and work with you on the transformation process to develop the idea further, make people see it positively (and not resist it), and then implement the whole system change. But change is not about change management, it is much more about continuity management. It is often clear what has to be changed, but it is crucial to guarantee continuity. The whole system will be different.

Why do you think we should reinvent every 3.5 years?

Zhexembayeva: In previous centuries, transformation happened every 75 years. In the 20th century it was every 15 years. Today it is 5 to 7 years. In future it will be even less. Here, the crucial consideration is not what, why or how we should transform, but when. The question is: Can we go through massive transformation without painful disruption and collapse? And the second question is: How can we manage transformation?

We need to focus on what we do really good. For example Hidria, a company producing heating and cooling systems had its headquarter at a Slovenian mountain village. All of the inhabitants were working there. But the revenues shrinked; the company had to cut costs to survive and to avoid mass layoffs. They had to focus on what they were really good at – and it was electric motors. So they changed their industry and started to produce electric motors for automotive vehicles. Nearly every electric or hybrid car today is powered by technologies from Hidria.

Your essential rule of how to be successful as a company in the ever-changing rollercoaster economy is: take the essence of what you are and let go of everything else. What does that mean for companies in practice?

Zhexembayeva: The speed of change forces you to recognize, what the essence is, what your values are, what you will not give up. If you have a real strong essence of what you are, you become rooted in it and the storms of disruption will not harm you.

For example, the essence of me is dynamic co-creation, I love working in projects. So I built my life around it. 18 days in five countries - my life is crazy for others (laughs). If you don’t choose by yourself who you are, others will do it.

And, letting go is very hard, but crucial. When you develop your product and it is your baby, and the market says: "your baby is ugly," as a normal parent you feel hurt and defensive. You keep thinking: maybe they don’t recognize the brilliance of our product. If you want to be a really good improvisational musician, you can't do it without having years and years of training. When I was much younger and I gave speeches like that and people didn't find it very good, I learned to see that feedback is crucial. My professor always said in the class: facts are friendly. They try to tell you something. Improvisation is not lack of discipline; it transcends discipline. It is hard to know when it is time to let go or if we should wait one more minute and becomes a success. It needs the highest form of intelligence: intuition. It is years and years of experience which lead you there. We cannot be the victims of our own success. What brought us to success is often the exact same thing that destroys us. That’s how Kodak died. That is why we have to reinvent ourselves constantly.

What are the big mistakes in implementing the reinvention process?

Zhexembayeva: Number one: not appreciating the power of politics. Humans are political beings. If two come together, it is politics. You have it in your daily life. We have developed a new model of power; most parts of the world look at power as a fixed resource: if I want more power, the only way is to take it from others. It is called a zero-sum-power structure. The sum is always zero. However, we need to create a win-win-power structure; like tomato seeds, if they grow we can have many more tomatoes for everyone.

In companies we do audits. In the political audit we look to see who is gaining power and who is losing power. People who lose power are blocking change. The system has to bring usefulness to everyone.

Number two: negative emotions. Today we do not have positive emotions towards change – we have fight or flight reactions. People are scared; they are not stupid. You cannot use facts or power to deal with negative emotions. The only way is to offer an alternative emotion to fear, anger and sadness. And that is fun. So bring a new technology and do training around it that brings fun and a sense of community.

One of your ten rules of reinvention is: Companies do have to reinvent themselves every three years.  You suggest a new executive position in addition to the chief executive officer: the chief reinvention officer, who should push reinvention forward. Is it enough to have one person in charge?

Zhexembayeva: Every company I see is already stressed with running the existing business model. There are no resources to talk about new models. Companies solve this problem differently: in some it is a venture capital fund with a separate business unit and organization. It serves as a reinvention mechanism for the whole company.

Other companies have it in-house: they introduce a transformation or reinvention officer as a role with a team or they introduce different processes where they reinvent in a regular basis. For example, the company Danfoss invited every employee to reinvent one thing in at least 24 hours. There is a way to do it through HR or through an external fund; it depends on your culture. But one person is not enough, you need to have ambassadors in the company. We need a nervous system inside the company that is cross-functional and connects the dots. As long as you have a consistent way of renewing yourself, it’s ok.

Your clients are large companies, such as Coca Cola and IBM, as well as small startups. Big businesses are facing disruption partially caused by startups. But what are the challenges facing startups?

Zhexembayeva: I think the biggest issue for startups is figuring out how to build the idea of reinvention into the system from early on.The synonym in the startup world is pivot: I went this way and then I pivoted it. You need the internal capacity to change your mind when you are proven wrong. Good startups collect a lot of feedback on their products and adapt quickly. Startups are on the other side of disruption; they need to understand how existent systems work. Most of them don’t want to disrupt and kill industries. They don‘t always know how to become a productive part of the system. We help them understand how big business works and how they can become suppliers and solution providers in the system and to become the "builders" instead of the "killers". 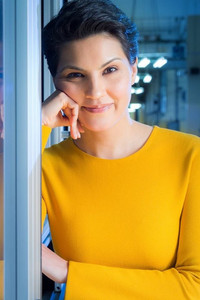 Dr. Nadya Zhexembayeva has been called ‘The Reinvention Guru’ and is not only a business owner, but also an educator, speaker and author. She founded the WE EXIST Reinvention Agency and has held several TedX talks in Austria, Slovenia and in the USA and participates in other workshops worldwide.